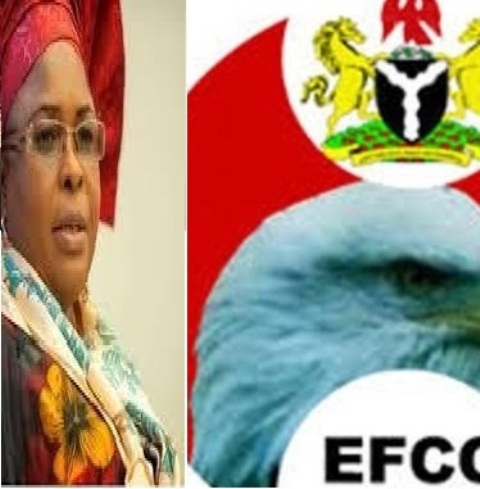 The Economic and Financial Crimes Commission has officially announced  that  the total amount of money traced  to Mrs. Jonathan account is now #17billion.
A fresh N2.114bn has been uncovered by the commission in  the bank account of Magel Resort Limited, which was allegedly owned by Mrs. Patience Jonathan and her late mother, Mama Charity Oba.
According to PUNCH report this morning, Patience, the wife of former President Goodluck Jonathan, had, last week, filed a N2bn fundamental human rights suit against the EFCC, accusing the anti-graft agency of subjecting her to psychological trauma, unnecessary persecution and going as far as freezing her late mother’s accounts.
However, an interim report of the EFCC, made available to The PUNCH, accused Mrs. Jonathan of perpetrating fraud through some of her non-governmental organisations.
The report adds that at least N17bn, including funds from some government agencies, were paid into the accounts of Mrs. Jonathan’s NGOs.
The report states, “Another company owned by Mrs Jonathan is Magel Resort Ltd. It was incorporated by Mrs. Jonathan’s late mother. But Patience Jonathan became the sole signatory to the account of the company by board resolution upon the demise of her mother.
“Though registered as a resort agency, sources at the EFCC disclosed that the agency was probing the circumstances in which the firm secured over N200m IT contract from the National Information Technology Development Agency.

“The contract was allegedly bankrolled through the National Information Technology Development Fund. Several other persons under investigation for money laundering by the anti-graft agency were discovered to have made payments into the company’s account including a hotelier in Central Area, Abuja, who has been invited for questioning.
“The total sum allegedly laundered through the account of Magel Resort Limited, owned by Mrs Jonathan and her late mother, is put at N2.114bn.”
The commission alleged that another NGO, owned by Patience, Ariwabai Aruera Reach Out Foundation, had various accounts but the principal account was domiciled at Diamond Bank.
The EFCC said it stumbled on evidence in which several government agencies made payments into the account.
A total inflow of N2.4bn was allegedly recorded in the account between 2009 and 2015.
The commission alleged that some of the NGOs had Patience’s domestic servants as directors.
The report adds, “Investigations equally discovered that Mrs. Jonathan maintains a dollar account with Diamond Bank which received huge financial inflow from her domestic aides.

“Some of the domestic aides that made payments into the accounts are also trustees of her so-called NGO and director in her companies. The balance in the account was $12,831,173.
“Another dollar account of the former First Lady was discovered in Skye Bank. Inflows into the account came through deposits by domestic aides of Mrs. Jonathan. Intelligence reports indicate that most of the purchase of luxury items by the former First Lady was through the Platinum card of the account. The total amount in the account is $7.9m.”
The anti-graft agency said a total of N1.8bn was deposited in the account of Flinchley Top Homes Limited, another company linked to Mrs Jonathan. The money was allegedly deposited by her domestic aides between 2009 and 2015.
The report adds, “Another discovery was the N2.1bn and N1.8bn deposited into the accounts of AM PM Global Network Limited and Pagmat Oil and Gas Limited respectively, between 2009 and 2015. Both companies are linked to the former First Lady.
“Another N1.140bn was also allegedly laundered by Mrs. Jonathan through the account of Lawari Furniture and Baths Limited, whose address is given as 100 Akamfa Road, Yenagoa, Bayelsa State.
“The bulk of the money was deposited by Bureau de Change operators.”
It was learnt that the BDC operators had been invited by the EFCC for questioning.
It was further alleged that the addresses of most of the companies were discovered to be fictitious as mails sent to them were returned undelivered.
In his reaction, the Chief Press Secretary to the former President’s wife, Belema Meshack-Hart, urged the EFCC chairman, Ibrahim Magu, to honour the National Assembly’s invitation rather than engage in media trial.
Meshack-Hart also rubbished allegations that his principal was using her NGOs to perpetrate fraud.
He stated, “I won’t exchange words with them since the matter is in court. The House has invited the EFCC chairman many times but he has refused to honour the invitations. Let him go and tell the National Assembly what he knows.
“However, it is not true that Dame Jonathan used her foundations to launder funds. The foundations helped over 700 people with heart diseases. “