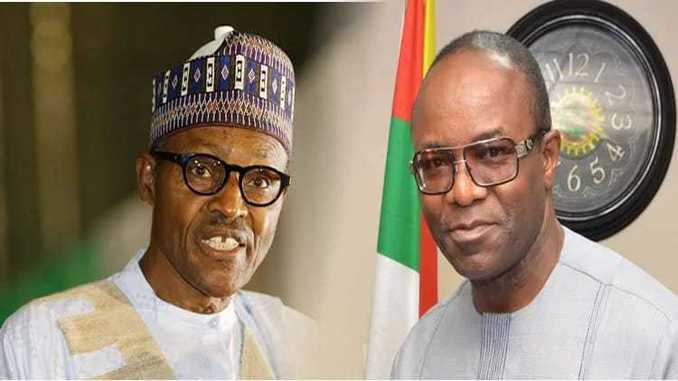 The minister of state for petroleum resources, Ibe Kachikwu, is advised by his colleagues to exit Buhari’s cabinet
The president feels the unfounded allegation raised the minister scandalised his administration
Buhari is yet to make known his next action over the issue The dust raised by the minister of state for petroleum resources, Ibe Kachikwu, over the unilateral award of hefty oil and gas contracts totaling about $25billion by the group managing director of the Nigerian National Petroleum Corporation (NNPC), Maikanti Baru, has taken a twist, as the presidency is considering taking actions against the minister having cleared the NNPC boss of any infraction.
The Nation reported that the fate of Kachikwu in the current administration is unsure following the allegation he made against the NNPC GMD, Maikanti Baru. The newspaper stated that President Muhammadu Buhari is considering taking punitive actions against Kachikwu after having found Baru not guilty of corrupt practices in the unilateral award of the $25b contracts on Monday night, October 9.
The minister is said to be strategising with his associates, stakeholders and colleagues on his next move now that he appears to have has fallen out favour with the current regime. The newspaper stated that one of the lifelines suggested to Kachikwu by his colleagues was to voluntary exit Buhari’s cabinet to preserve his integrity after it was clear that the presidency might have backed Baru.
Speaking on the issue, a top government source told the Nation that President Buhari was displeased by the development and refused to take any immediate decision because his image and the reputation of his administration were involved.
The president felt the unfounded allegation raised by Kachikwu scandalised his administration in the public eye. “The Presidency directed the GMD of NNPC to provide facts and figures, which it got from Baru,” the source said.

“Thereafter, the NNPC Act, the NNPC Handbook and Public Procurement Act were consulted on  the responses of Baru to find out if infractions were committed by the corporation. “Having been convinced that there were no infractions, the Presidency then directed NNPC to lay the cards on the table for Nigerians to see and judge.
“What was uppermost in the responses of the GMD was the fact that ‘there was no evidence of sharp practices, bribery, looting of funds and diversion of transaction cash’.
“The allegations of Kachikwu were rated as ‘wild, intentional and political in nature’ against the administration he is serving.” A presidency source told the newspaper that Buhari has not yet spoken on the next action he might take, adding that no one knows what the president is thinking.
A highly-placed stakeholder who spoke about Kachikwu’s travails said the minister was consulting with some vital players in the oil sector about what transpired. “I am aware that the minister has been holding consultations and telling some vital players in the oil sector what transpired.
“Of importance to him is the allegation of alleged plot to sabotage the government of President Buhari with the leakage of the August 20 memo. He has maintained his innocence that he did not leak the letter. “But it is tragic that no one believes Kachikwu’s story anymore in the Presidency,” the source said.