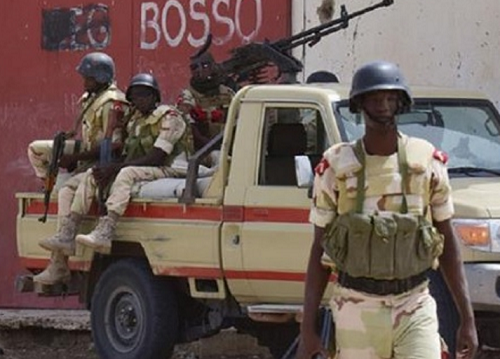 There was heavy security presence at the headquarters of the Nigerian National Petroleum Corporation, Abuja on Friday.
Armed security men from the Nigeria Police Force and the Army were sighted at the entrance of the oil firm, while police pickup vans and armoured personnel carriers were conspicuously stationed on both sides of the roads that lead to the NNPC.
It was learnt that the deployment was sequel to a request by the security department of the corporation.
A source at the security department told one of our correspondents that the move had become necessary due to the tension generated by the memo written by the Minister of Petroleum Resources, Dr. Ibe Kachikwu, to President Muhammadu Buhari, which was leaked.
The minister, had in the memo accused the Group Managing Director of the NNPC, Maikanti Baru, of insubordination.
The memo has generated reactions from Civil Society Organisations, opposition parties and even the National Assembly, which had commenced investigation into the allegations of the awarding of contracts to the tune of $24bn without due process.
A source at the NNPC said, “There have been soldiers at the NNPC since the Boko Haram threats of 2013.
“However, we received fresh reports that people may be coming to demonstrate at the NNPC, so we had to beef the security up around the NNPC.
“Also, the feud between both sides has caused some division at the NNPC. For now, visitors won’t be allowed to drive in, except they have special appointment or they are contractors and there are special identity cards given to contractors.”
The source revealed that soldiers were running eight-hour shifts at the NNPC and had also been placed on alert.
He added, “There are eight soldiers on duty every eight hours and then there are snipers at the six watch towers.
Heavy security at NNPC headquarters
“Under the bridge beside the NNPC, there is a military unit on standby. They have been there since Boko Haram started sending threat messages but now that two bosses are fighting, they have also been placed on alert.

“Security has also been beefed up because of the sensitivity of the issue. They are under a Senate investigation and all those who got the (about) $24bn contracts have their interests to protect, including international oil companies. So, we are just taking precautionary steps.”
The situation around the NNPC headquarters was described as unusual by people working there.
But when contacted to speak on why there was heavy security presence at the corporation, the firm’s Group General Manager, Group Public Affairs Division, Ndu Ughamadu, described the development as normal.
He said, “From time to time, we do that. They were there like that sometime last month, and so on and so forth. However, you are aware that this is the country’s national oil corporation and it needs security presence, just like the kind of heavy security presence at the Central Bank of Nigeria.
“So it is not unusual. The security men are always there. Last month, they sent mobile police and military contingents here. Do you expect a national oil corporation not to have security presence?”
When one of our correspondents insisted that the security presence had increased, the NNPC spokesperson replied, “We had about the same level of security presence last month. Most times, heavy security vehicles come in and go out.
“If you come here around 3pm daily, you will see heavy military vehicles moving in and out when they are changing duties. So the official reaction you seek to this issue is that it is a normal routine.”
Also, the Federal Capital Territory Police Command spokesman, Anjuguri Manzah, said the tightening of security around the NNPC Towers was “just routine police movement.”
He denied that there was a security emergency at the NNPC headquarters, adding that the police operatives deployed in the complex were on regular police duties.
“There was no security emergency; the deployment was just routine police movement. I am sure the men must have left the place by now. They are not meant to stay there for long,” he explained.
It was however gathered that the armoured trucks and pickup vans left the area at 5pm when most offices in the area had closed.
Follow Us on Twitter!