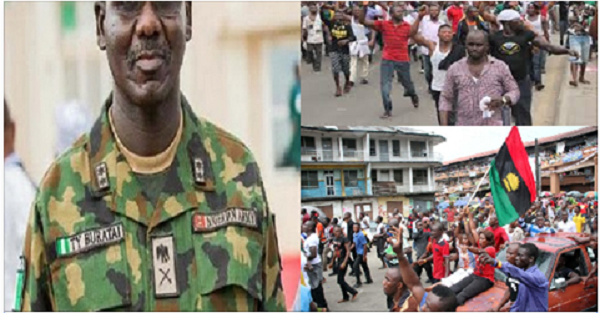 Ahead of the November 18 governorship election in Anambra state, members of the Indigenous People of Biafra, have been warned by heads of Security formations in the state to stay clear.
This is coming after IPOB members reinterated their position to boycott the forthcoming Anambra elections.
Heads of Security formations in Anambra say they are ready to provide adequate security, before, during and after the November 18 governorship election in the state.
The Commissioner of Police and Chairman, Independent National Electoral Commission (INEC) Inter Agency Consultative Committee on Election Security in the state, Garba Umar, said this at the end of the committee’s meeting on Tuesday in Awka.
Mr. Umar told newsmen that the meeting was a follow-up to the one held in September, noting that after a review of security issues, it became certain that “the coast was very clear for a peaceful conduct of the poll”.

“I am glad to announce that INEC is fully prepared for the November 18 election and the security agents are also prepared even if the election is coming up today.
“We are calling on the people to come out on the Election Day to participate, there will be enough election materials, and there will be adequate security,’’ he said.
On the fear that Indigenous People of Biafra (IPOB) would disrupt the election, Mr. Umar said that there was nothing like IPOB there, and that, “even if they are spirits, security men are super ghost and will go after them because security operatives are ready”.

He said that there would be restriction of movement for unauthorised persons on the election day, but that there was no cause for alarm.
The INEC Resident Electoral Commission in the state, Nwachukwu Orji, said the commission had addressed issues of recruitment, deployment and others for the poll.
Mr. Orji said INEC was fully ready for the election, adding that all the materials that the commission was “supposed to receive at this level have been received, and within the next one week, INEC will take possession of all the Permanent Voter Cards (PVCs).”
The REC added, “We are using this opportunity to call on the public to go to the nearest INEC office where they registered to collect their PVCs.
“For the recently concluded voters’ registration exercise which took place from April to July, 2017, and for the ward level registration which occurred from August 10 to August 15, the cards are being prepared and we will announce date for their collection.’’ the commissioner said.
The News Agency of Nigeria (NAN) reports that Heads of Army, Immigration, Federal Road Safety Commission, Nigeria Prisons Service, National Drug Law Enforcement Agency, among others, attended the meeting.
Follow Us on Twitter!