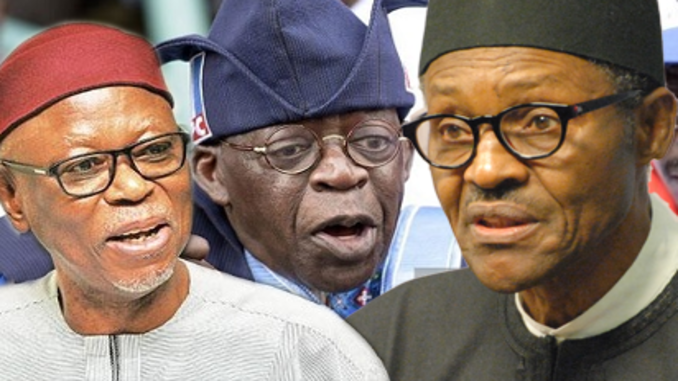 South-South leaders on Tuesday canvassed party supremacy in Nigerian politics, just as they called on elected officials, political appointees and party members to abide by the decisions or instructions made by the executive committee or national working committee of the party.
The leaders said that contrary to the belief in some quarters, the National Chairman of the All Progressives Congress (APC), Chief John Odigie-Oyegun was piloting the ruling party to the satisfaction of all members.
The group NEWSFLASHNGR.com can understand lauded the leadership of the All Progressives Congress for notching up significant achievements through a combination of creativity, excellent resource management and great vision.
“The allegation that Chief John Odigie-Oyegun is not carrying all the APC governors along is totally false. It is to unleash mischief on the hard-earned integrity and leadership style of the national chairman” the leaders said.
The leaders in a statement made available to NEWSFLASHNGR.com in Port Harcourt, praised Oyegun for making the party and government at various levels responsible to the needs of the people.
“Chief John Odigie-Oyegun’s capabilities and efficiency are well known to all Nigerians. The former governor of Edo State is a man of high moral standards. He remains very focused and uncompromising.”
They condemned the character assassination and abuse of perceived enemies, describing the comments of a former Commissioner of Information in Edo State, Chief Charles Idahosa as offensive, scornful and false.
“We reject the accusation in totality. It was made in ignorance. APC is thriving, making great progress with Oyegun at the wheel, assisted by others. The resort to wide allegations is Idahosa’s attempt to throw a spanner in the works to distract this focused administration.”

Signed by the Chairman, South-South Front (SSF), Chief John Harry, the leaders lauded the quality of Oyegun’s administration, his commitment to the tenets of democracy and expansion of the democratic space.
“We act on facts and not on speculations and lies. APC is not in trouble or divided. There is no plot to dislodge the national chairman of APC. There is no battle between the presidency and some APC state governors on the 2019 polls” the leaders said.
Specifically, the leaders praised Oyegun for erecting a strong structure and adhering strictly to the Constitution of the party.
“Oyegun is performing excellently. President Muhammadu Buhari and the party chairman are not at loggerheads. Members are not working at cross purpose. His leadership style is not synonymous with sycophancy, deceit and double talk.”
Confidence in Oyegun’s leadership, the leaders described APC as a highly organized party.
“Contrary to fears expressed after the Supreme Court judgement on PDP leadership crisis, APC is still intact. It is not lacking in the basic democratic ingredients.”
The leaders who accused Idahosa and his sponsors of working for the Peoples Democratic Party (PDP) urged APC governors, chieftains and members across the nation to support Oyegun.
“Idahosa and his sponsors are motivated only by their own selfish interests. They should not be taken seriously.”
“We are very proud of Chief John Odigie-Oyegun. He has given good account of himself in politics and public life” the leaders added.