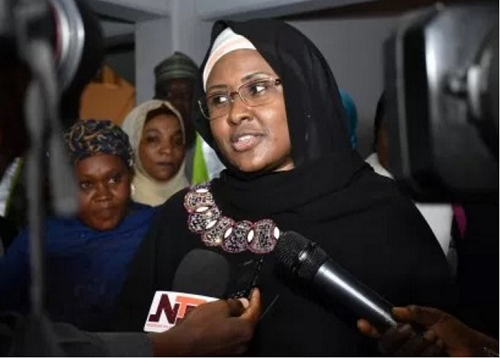 Wife of the president, Aisha Buhari, has blamed the Presidency for the poor management of the State House (Aso Rock) Medical Centre (SHMC), which is on the verge of collapse. Investigations revealed that the clinic is presently operating without drugs, functioning medical equipment and other necessary consumables. She called for a probe of the budget utilisation at the clinic.
The wife of the president lamented that consumables, including syringe and equipment, are not available at the clinic Mrs. Buhari spoke yesterday at the opening of a one-day stakeholders meeting on Reproductive, Maternal, Newborn, Child, Adolescent Health and Nutrition (RMNCAH and N) organised by her pet project, Future Assured, at the Presidential Villa, Abuja.

The event brought together wives of the 36 states governors at the Villa. Wife of the president told the gathering of her unpleasant experience when she needed an urgent diagnosis at the SHMC. She said shortly after her husband returned from London, United Kingdon (UK), where he battled with his health challenge, she also fell sick and needed to be examined on an X-ray machine at the Aso Rock clinic.
The president’s wife disclosed that for poor management of the clinic, she was informed that the X-ray was not functional. She lamented that the situation at the SHMC was a confirmation that the health care system in Nigeria was very poor at the moment and needed urgent intervention by governments at all levels. “I would like to be realistic to say a few words concerning health in Nigeria and health delivery system in Nigeria.
It is very very poor, sorry to say that. “I am happy the Managing Director of Aso Clinic, Dr. Hussain Munir, is here. “As you are all aware, for the past six months, Nigeria wasn’t stable because of my husband’s ill health. We thank God he has fully recovered now.
“If somebody like Mr. President can spend several months outside Nigeria, then you wonder what will happen to a common man on the street of Nigeria,” she noted. The president’s wife further explained: “A few weeks ago, I was sick as well, they advised me to take the first flight out to London, I refused to go. “I insisted I must be treated in Nigeria because there is a budget for an assigned clinic to take care of us,” Mrs Buhari said.
The president’s wife wondered what the management of the clinic has been doing with funds allocated to the SHMC. She said: “If the budget is N100 million, we need to know how the budget is spent. Along the line, I insisted they called Aso Clinic to find out if the Xtray machine is working.
They said it was not working. They didn’t know I was the one that was supposed to be in that hospital at that very time. “I had to go to a hospital that was established by foreigners in and out 100 per cent. What does that mean? “So, I think it is high time for us to do the right thing.
If something like this can happen to me, no need for me to ask the governors’ wives what is happening in their states. This is Abuja and this is the highest seat of government and this is Presidential Villa.

“One of the speakers has already said we have very good policies in Nigeria. In fact, we have the best policies in Africa. Yes, of course, we have, but the implementation has been the problem.
“So, we need to change our mindset and do the right thing. I’m sure Dr. Munir will not like me say-ing this, but I have to say it out.” While accusing the management for not setting out its priority straight, Mrs. Buhari said: “As the Chief Medical Director, there are a lot of constructions going on in this hospital, but there is no single syringe there. What does that mean? Who will use the building? We have to be good in reasoning. “You are building new structure and there is no equipment, no consumables in the hospital and the construction is still going on.”
She said it was sad to know that Nigeria was one of the countries with the worst health records for children and women despite the efforts of the past, adding that more needed to be done.
The president’s wife explained that this informed her Future Assured Initiative two years ago to champion the well-being of women and children. She acknowledged the support of all stakeholders for their continued support. Mrs. Buhari urged the governors’ wives to champion the cause of advocacy to support the RMNCAH and N programmes in their various states. She donated a floor of the three-storey building of the Future Assured Centre in Abuja to the women for the purpose of the advocacy.
The revelation by the First Lady is coming a few days after the president’s daughter, Zahra, took to her Instagram page to raise concerns over the poor state of the SHMC.
The centre provides medical services to the president, vice-president and their families, aides, members of staff of the State House and other entitled public servants. It is also a training facility for house officers and other medical personnel. On her Instagram handle @mrs_zmbi, on Saturday, Zahra raised concerns over the poor state of the hospital despite the N3 billion budgetary allocation in the 2017 budget.
She specifically called out the Permanent Secretary in the State House, Jalal Arabi to provide answers as to why drugs as simple as paracetamol, syringes and gloves were not available, leaving patients and staff to individually source for them. Using the hashtag #statehousepermsecplsanswer, she asked: “Why isn’t there simple paracetamol, gloves, syringes… why do the patients/staff have to buy what they need in state house clinic?
“More than N3 billion budgeted for state house clinic and the workers there don’t have equipment to work with?” Permanent Secretary of the State House recently announced government’s plans to commercialise the clinic in order to make the place work. In the 2016 budget, the State House Medical Centre was allocated N3.219 billion, which was meant for the completion of on-going work as well as procurement of drugs and other medical equipment. The SHMC budget in the 2017 fiscal year was reduced drastically from N3.89 billion to N331.7 million.