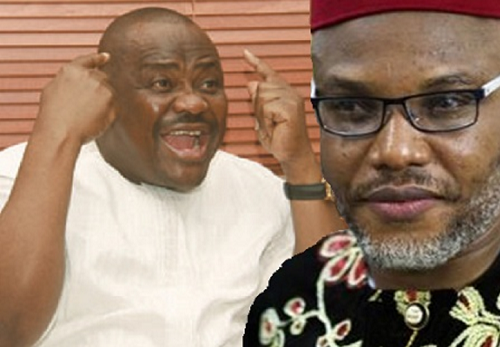 Rivers State Governor, Mr. Nyesom Wike is set for a major falling out with the Indigenous People of Biafra, IPoB following media reports that linked the governor with the recently designated terror group.
Mr. Wike and IPoB have been accused of being behind the mass panic caused by hoaxes about soldiers coercing school children to receive killer vaccines that spread the Monkey Pox virus. The Federal Government and experts have debunked reports of the story as false.
A reliable source in IPoB told our correspondent that the group, which is agitating for the restoration of the erstwhile Biafra Republic, has become suspicious of Wike's continued commitment to their cause. The source, who did not want to be identified because IPoB has been outlawed, accused the Rivers State Governor of exploiting his group for his selfish ends while treating members like mentally incapacitated people.
According to him, the monthly subvention of 50million naira has been stopped over what the Governor allegedly described as lack of accountability in the running of IPOB affairs.
He said, "Some of us think we can no longer trust this man. When Operation Python Dance II started clamping down on our members, we had thought that we can carry out reprisals in Rivers state since Governor Wike as a strategic partner should give us cover as someone in the opposition with a common enemy.
"The man has stopped dropping the agreed sum and for over 2 months no one has heard from him which is a further proof that he is practically playing games with the movement after achieving his aim.

"We were however jolted when Wike started saying things like IPoB are not welcome in Rivers or IPoB should not come to Rivers state, IPoB should stay away. Much as some of us initially thought that his attitude was to cover the relationship he has with us at that time, we have now become suspicious since the October 17 court date when the Federal Government failed to produce our Supreme Leader, Mazi Nnamdi Kanu in court.
"The thing is that most of us now think that Wike knowingly allowed the APC (All Progressives Congress) to know that he was connected to the Monkey Pox vaccine message that we were sending around. It was a surprise when APC linked Wike to it and later some CSOs even provided details that should only be known to those that planned the strategy. If we did not reveal the secret, which we know we did not, then it could only have been the Governor.
"He has betrayed us when they decided to say IPoB was a terrorist organization, he betrayed us when our leader's house was invaded by soldiers, he betrayed us when our leader was not provided in court and he has again let us down by exposing the way we frustrated the criminal medical outreach of the Nigerian Army. It will not only be stupid to continue trusting Governor Wike but it is also dangerous since he may one day decamp to the APC and completely give away our strategic secrets.
"We are now having to go back to the drawing board because we cannot give up on our quest for Biafra just because of a sellout, which is why it was agreed that there should be no official IPoB statement on Governor Wike's betrayal. It is not even as we are worried about him because when you have a cause that the comments of someone like former President (Goodluck) Jonathan tallies with then you don't allow little setbacks to hold you," the source explained.
Mr. Wike's spokespersons have not commented on the IPoB allegations that he betrayed them as they have not answered calls to their mobile numbers while text messages sent to them were not replied.
Wike had last month dismissed claims that the opposition, including himself, were sponsoring IPoB. He said “Who are those being affected by the activities of IPOB? Are they not those in the opposition states? In the hay days of Boko Haram, does the Inspector of General of Police (IGP) mean it was the opposition then that was sponsoring Boko Haram just to distract the government then?
Follow Us on Twitter!