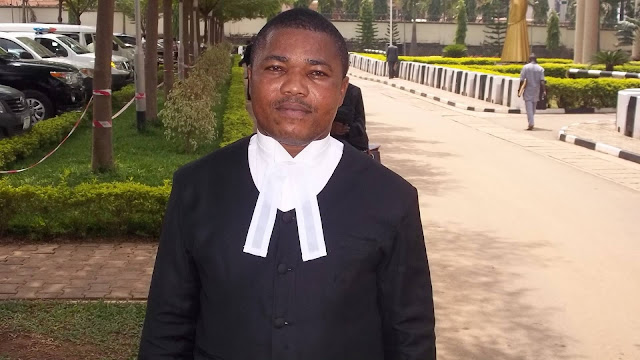 A foreign affairs analyst who has been following and monitoring events closely since the Biafra agitation started has taken to task the trio of President Buhari together with Nigeria's Chief of Army Staff , Lt. General Buratai, Barrister Ifeanyi Ejiofor, the lead counsel of the leader of the Indigenous People of Biafra, Nnamdi Kanu.
While he blamed the military under Buratai's command for being foolhardy over the armed invasion of Kanu's home, others were equally tongue lashed in his piece below titled: ''Where is Nnamdi''?
Barrister Ifeanyi Ejiofor, he said, committed an irredeemable blunder for not advising his client well enough in some of his actions which the military cashed in on to lead an attack on his client's home.
He criticised Barrister Ifeanyi Ejiofor for saying an accused who commits another crime while on bail cannot be arrested - a statement which he said he made while fielding questions in an interview with the Daily Sun.
He questioned the rationale behind the statement which he said exposes the lawyer to suspicion and asked the script he is really acting.
'Is he defending Kanu or sabotaging the struggle? he queried
Read the full article below:
''Today makes it three calendar weeks that the Nigerian Army led an armed invasion of Mazi Nnamdi Kanu's home in Umuahia, the Abia State capital with accusations and counter-accusations renting the air.
The Army had said the leader of the Indigenous People of Biafra is not in their custody while the leadership of the outlawed group says otherwise thereby bringing the claims in question.
However, it is on record that the embattled IPOB leader had consistently re-assured his supporters and followers that on no account will he go on exile and abandon the struggle for the restoration of the ancient nation of Biafra. This, he said, times without number during his numerous rallies in Nigeria's southeast and beyond.
Prior to the military invasion, his Afara country home was a beehive of activities but today that same place has become a shadow of its former self following an alleged attack on his residence by armed soldiers who say are on a salvage mission in the region codenamed Operation Python Dance 11''.
Be that as it may, his lead counsel Barrister Ifeanyi Ejiofor has issued statements and gone to court to prevail on Nigeria's army chief, Lt. General Tukur Buratai to produce the missing IPOB leader on the next court day with the fate of his three sureties hanging the balance should Nnamdi Kanu be nowhere to be found.

In a similar vein, worried by the sudden disappearance of the embattled IPOB leader, the British High Commission wanted clarification from the Nigerian government on his whereabouts. Days after the query issued the Federal Government, the former Governor of Abia State, Dr Orji Uzor Kalu alleged Kanu escaped en route Cameroon and Malaysia to the United Kingdom where he is also a citizen.
As one can see under the existing circumstances there are too many iron rods burning in the fire as to his whereabouts.
One question that readily comes to the mind is ''What led to the military invasion of the IPOB leader's house? Was the invasion necessary when he had less than five weeks to appear in court? Why was he not openly arrested for allegedly flouting his bail conditions to enable everyone know whose custody he is?
While I fault Barrister Ejiofor's claim that an accused on bail cannot be arrested if he commits another crime, I made bold to say here if Kanu had before his sudden disappearance committed another crime under Nigeria laws, there is no legislation anywhere under the sun that bars an accused who commits another crime while on bail from being arrested.
I was taken aback after reading his press interview with the Daily Sun where he said an accused on bail cannot be arrested. This, I dare say, is mediocrity personified for there is no existing legislation anywhere in this regard.
Barrister Ejiofor ought to have been able to advise his client against the inauguration of parallel security outfits in his capacity as his counsel knowing full well the dangers inherent in it which the military cashed in on to effect an armed invasion of the IPOB leader's country home. I think it is pertinent here to ask Ejiofor this searching question. Is Barrister Ejiofor defending Kanu or sabotaging the struggle?
It has, therefore, become absolutely necessary to put the Chief of Army Staff to task as to the whereabouts of Nnamdi because he should have been openly arrested during or shortly after the inauguration of the parallel security outfits to enable the world knows whose custody he is.
To have pretended nothing happened after the inauguration of the security outfits before the attack on his home and alleged abduction is sheer foolhardy on the part of the military.
If they knew and considered the inauguration a crime, then he should have been openly arrested to enable the world knows whose custody he is.
However, if the assertion in a publication by The Punch newspapers published on September 17, 2017, headlined ''Terrorism charge: Nnamdi Kanu flees, goes into hiding'', is anything to go by, a certain IPOB leader in the third paragraph of that publication was quoted as saying:
“We have to apply wisdom to whatever we are doing. We have realised that there is a grand conspiracy against Kanu and other top leaders of our group.
“Just imagine barely few hours after the Nigerian military declared members of IPOB and other pro-Biafran groups as terrorists, our own governors came up with their own outright ban of our activities.
“This definitely will give the soldiers and other security agencies the opportunity to arrest our leader and mount a deadly clampdown on all IPOB members. So, it is better to operate from a hideout for now.”
It, therefore, becomes a contradiction in terms if the statement credited to IPOB member is true except otherwise interpreted.
However, the question remains; where is Nnamdi Kanu? The military has a portion of the blame while his defence counsel in a sheer display of mediocrity also committed an irredeemable blunder. The greater part of the blame goes to Nigeria's President who is the Chief Security Officer of the Republic for uneasy, they say, lies the head that wears the crown.
From the foregoing, I ask yet again, where really is Nnamdi? President Buhari, Nigeria's Army Chief, Buratai, Barrister Ejiofor and lastly IPOB leadership must tell Nigerians the whereabouts of the embattled IPOB leader. We all have a burning desire to know!
Follow Us on Twitter!