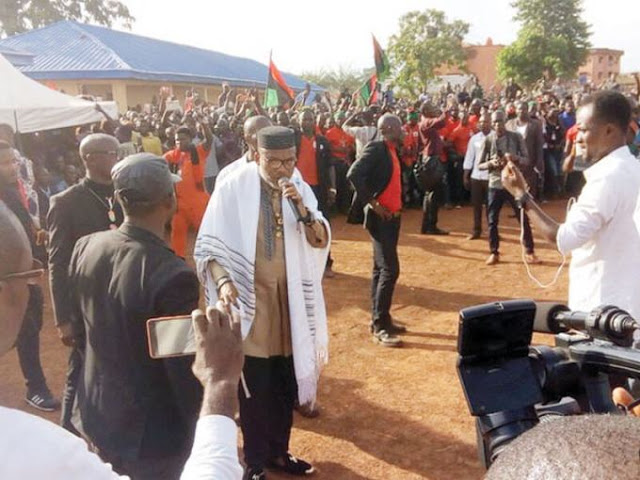 Ngwa and Ukwa people have reportedly converged on the palace of Eze Bernard Enweremadu, the Ezeukwu of Ngwaukwu, which is the ancestral home of all Ngwa people in the South East region to openly take a position on Biafra.
In a meeting called to speak their mind and make their position known amid the ongoing agitation by the Indigenous People of Biafra to carve a state out of Nigeria, the Ngwaukwu people in a three-page document signed by their Traditional Prime Minsiter, Nze Joe C. Nwogu and Palace Secretary, Samuel Azumara have taken a stand on the issue.
The Sun reports that 'the Executive Council held that the issue of IPOB has been studied and observed with its incidences and crossfire of views.
According to them, “the experience of the 1967-1970 civil war is still fresh to be forgotten to the extent of being part of another activity that will lead to the outbreak of another war.”
Thus as they converged on the Eze Ukwu Palace at Ngwu Ukwu, the Ngwa people said that the quest or agitation for  Igbo interests, especially in the area of justice, equity and sense of belonging, was acceptable within the armbit of the laws of the country.
But they condemned the way and manner the IPOB has “pretended to champion the Igbo or Biafran agitation,” saying that it was far from being genuine.

The Ngwa people who spoke through their Traditional Prime Minister, Nze Nwogu, during an interaction with newsmen, said that “IPOB tended to be a sovereignty which is not allowed” in law.
“IPOB should not be allowed to go on bastardizing or contradicting the existence and efforts of Ohanaeze Ndigbo, which is a better organized, experienced and intelligent body to ventilate Igbo issues, interests and agitations”, he said.
He disclosed that the Ngwa people were aware of the underpinning internal Abia conspiracies and plots against the state governor, Dr Okezie Ikpeazu through some desperate Abia politicians who, he claimed, were working to impose a state of emergency on the state with an aim to oust the governor from office.
“We are aware that these group of politicians have found the IPOB security challenges a veritable avenue to unleash their devilish pots on the governor, Ngwa and Ukwa people and other well-meaning Abians as they stoke the fire of insurgency among the IPOB boys by misinforming them that the governor is conniving with the presidency and Federal Government to wipe IPOB away by killing their members and yet they run back to Abuja to blackmail the governor as condoning and sponsoring IPOB.

“We call on President Muhammadu Buhari , the Federal Government of Nigeria as a whole to painstakingly verify any and every bit of information on Abia State concerning the governor before taking any decision or action, including always consulting or cross-checking with the governor,” he said.
The NgwaUkwu people also called on Abia people to realize that if they consider as good and necessary the Igbo/IPOB agitation for equity and justice, then the equity of two tenures for each of the zones that take turns for the governorship of the seat of Abia State must not be denied the Ukwa/Ngwa man who is occupying the position presently, adding that “he must be given the chance to also do two tenure as did his predecessors”.
They said that all those putting roadblocks to the success of Governor Ikpeazu are enemies of the state as they commended the governor for his mature and timely intervention that saved what would have been a horrific blood-bath in Abia State and in turn provoke conflagrations of reprisals across the country.
“After all the Igbo are all over Nigeria with inestimable investments where they are,  and we should join hands with all well-meaning Nigerians all over and beyond to urge all parties that there is no alternative to peaceful co-existence, dialogue, negotiations as a means of achieving the interests and objectives of all,” they said.
They thanked Eze Enweremadu, the traditional head of Ngwa land, saying that he cautiously engaged the land from walking on the path of destruction that the moment had thrown up.
Speaking after the briefing, Eze Enweremadu explained that the people  of old Bende, with eight local government areas have taken “the opportunity to rule the state with our support, total loyalty and prayers for 16 years, we have two families in Abia namely old Bende and Ukwa Ngwa, and the governorship started with old Bende, which has governed for 16 years.”

He noted that Kanu “was a little boy, who did not bring up the issue of Biafra when his brothers were governing the state. Now, that it is the turn of Ukwa Ngwa people, justice must be done so that we will also do 16 years. The Igbo have established their enterprises everywhere, let us not beat the drum of war, let us seek peaceful co-existence.”