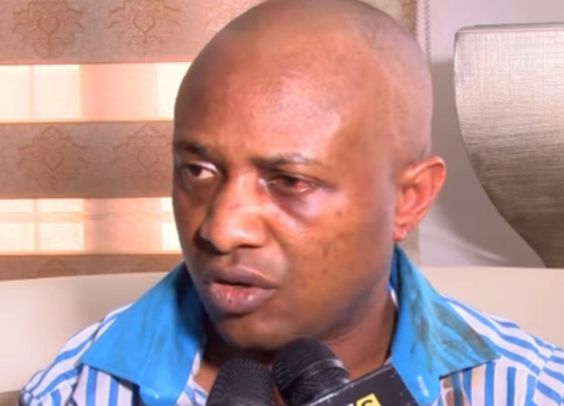 ​A 53 -year-old suspected robber and kidnapper, Linus Opara, has said he did not know how billionaire kidnapper, Chukwudumeme Onwumadike a.k.a Evans lured him into his gang.
Opara, who claimed to be a graduate of civil engineering, disclosed that he was an informant for Evans and his gang.
He said this at the headquarters of the Lagos State Police Command in GRA, Ikeja Lagos.
The 53-years-old said his role was to monitor victims while Evans paid him any amount he felt like for services rendered.
Opara, prior to his arrest said he operated a company, Linok Construction Company located at No. 3 Umezinne Street, off Saint Peters Street, Alaba, Lagos.
The informant, who was arrested at about 9pm on July 20, 2017 at his house in Igando, Lagos, claimed he was introduced to Evans by a late member of the gang identified as Doctor.
He said: ”Do not look at my white hair; it is not as a result of old age. Rather, my hair turned white because of long suffering after my graduation as a civil engineer from the University of Ibadan. It is still a surprise to me how an illiterate person like Evans was able to lure me into kidnapping and all his illicit business.
”I studied Civil Engineering in the University of Ibadan. I am married with four children and they are still schooling. My wife is a graduate of Accountancy from the University of Nigeria Nsukka (UNN), but she has not secured work till date.
“I am not anything to Evans. We only address him as chairman and sometimes as president of group of companies. I was arrested and taken to the State Anti- Robbery Squad (SARS) building in Ikeja on 20th July, 2017.

“I saw Evans for the first time the day I supplied a nutrition supplement because I am a distributor. The second time I met Evans was when policemen took me from their cell to an unknown place in Lagos, because I was blindfolded. I could not see where they were taking me to.
”It was when they took me to Evans that they removed the blindfold and I saw him. I addressed him as Nwachinemelu. Police were asking both of us questions and I was answering accordingly.
“They asked me how many times I worked for Evans and I said two times, and that I turned him down the third time that he asked me to do another job. I told the police that I monitored victims for him and he paid me. I did not know the names of the victims.
”During the first work I did for him, he sent a motorcycle rider to meet me at Olowola Bus Stop. He gave my phone number to him and he called me. When I met him, I asked him where he was taking me to. He said he was taking me to Trade Fair area. So I entered (sic) his motorcycle and he took me to under the bridge at Trade Fair.
”He drove (rode) towards Mile 2 area. Evans called me and asked where we were and I told him. But he asked me to go home; that I had done well.
“When we reached Alakija, I told him and he said I should not worry myself; that he had told others to allow me to go to my house. When he called again, he asked me to send my bank account number to him. I sent my First Bank account number to him and he wired the sum of N2 million to my account. I was surprised.
”The second time, it was the same process as he already had my bank account number. He sent me the sum of N700,000.
“When he called me for the third job, I told him that I was not interested, because I started sensing some errors in the business, like getting afraid for the kind of money he was giving me. The money he was giving me in the twinkle of an eye was bigger than the money I used to make in a whole year as a civil engineer.”
Follow Us on Twitter!