Home » news » BREAKING: The 2 Jeeps We Gave To Aisha Buhari NOT PERSONAL - Police Opens Up At Last

BREAKING: The 2 Jeeps We Gave To Aisha Buhari NOT PERSONAL - Police Opens Up At Last 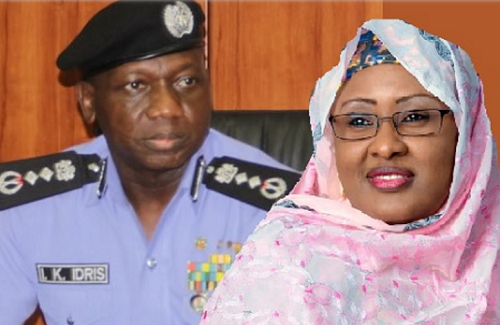 The Nigeria Police Force may have admitted it gave two Prado Jeeps to the President Muhammadu Buhari's wife, Aisha, but not for her personal usage, Fresh report according to The Nation Newspaper says
According to the report, the Police, however, denied claimed that it bought the Jeeps for the First Lady
Senator Isah Misau when he appeared before the Senate Adhoc Committee alleged that the Inspector General of Police (IGP) gave Aisha Buhari the vehicles.

The police while making clarifications on the allegation noted that the car was only given to the Aide to Buhari’s Wife after a request was made.
The police also said the car was given to the convoy for security purposes.
On the claim that the IGP Manipulated his retirement age, the Police explained that the difference in the date was just 12 days adding that it was insignificant.
Reacting to the allegation in Abuja Thursday, the Force Spokesman, CSP Jimoh Moshood said: “It is pertinent to state that at no time did the Wife of the President and Commander in Chief of the Federal Republic of Nigeria, Mrs Aishat Buhari requested directly or indirectly for vehicles for her use from the Inspector General of Police and no vehicle whether Jeep or SUV has ever been given for her personal use.
“To set the record straight and disabuse the minds of the public most especially those who must have read the story, that the Inspector General of Police is empowered by the 1999 Constitution of the Federal Republic of Nigeria as amended and the Police Act and Regulations, precisely Section 215 (1)(a&b) and (2) “The Nigeria Police Force shall be under the command of the Inspector General Police“ and the Deployment and Control of the entire Operations of the Force including allocation of Police vehicles for operational use throughout the country shall be under the purview of the IGP.
“It is within the powers of the Inspector General of Police as stated above that when on the 17th January, 2017, SP Sani M Baba –Inna, the ADC “Wife of the President” Federal Republic of Nigeria requested for two vehicles for Police Personnel in the convoy of Wife of the President for convoy movement and security purposes.

Two Police Vehicles  (i) A Toyota Sienna Bus with Reg. No. NPF 2406D (ii) A Toyota Hiace Bus with Reg. No. NPF 3363D were approved by the Inspector General of Police to the ADC “Wife of the President” SP Sani M Baba –Inna for the purposes requested and not to the person of the Wife of the President or for her personal use as alleged by Misau.
“The Nigeria Police Force categorically wishes to state that all the allegations made by Misau against the Inspector General of Police and the Wife of the President, Federal Republic of Nigeria of buying two (2) Jeeps for the Wife of the Presidents as reported in some media are baseless, untrue and done in bad faith to misinform and mislead the Public.”
On IGP’s retirement age, Moshood described the allegation as Ill-motive.
Moshood while displaying the copy of the letter to Journalists said: “For avoidance of doubt, the Nigeria Police Force Headquarters, Force Secretary Office wrote the Chairman, Police Service Commission on the 18th of January, 2017 drawing the attention of the Commission to the observation on the current Staff List of Senior Police Officers whereby the date of birth of the Inspector General of Police, IGP Idris, was incorrectly stated as 3/01/1959 instead of the actual date 15/01/1959.
“All documents and records of the IGP has 15/01/1959 as his date of birth except the staff list Senior Police Officers and this is the reason why the approval of the Honourable Chairman, Police Service Commission for correction of the error was sought in this regard.
“The difference of dates between 3/01/1959 and 15/01/1959 is just 12 days which is very insignificant in 35 years that a public servant can be in service”, he said
The police also noted that the Senator refused to answer to the allegation levelled against the IGP.
Moshhod said: “The Public will note that Issa Hamma Misau deliberately refused to prove the allegations he previously levelled against the Inspector General of Police on the floor of the Senate for which he was invited by the Senate Ad-hoc Committee but instead brought up other falsehoods to distract the Committee and the members of the Public.
Moshood added that the IGP will not be distracted or deterred by mischievous people from carrying out his statutory responsibilities for the benefit of the entire Police Personnel and all Nigerians.
Follow Us on Twitter!