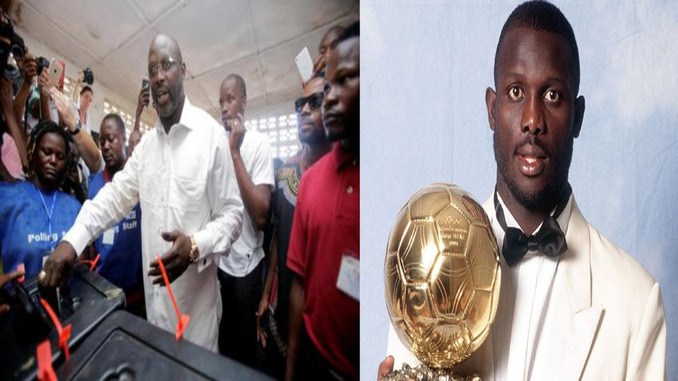 Weah, the 1995 World Footballer of the Year, is already a senator in his home country.
The 51-year-old is now standing in the west African country’s presidential election today.
He is favourite among the 20 candidates to succeed current leader Ellen Johnson Sirleaf.
Weah scored five goals in 15 Chelsea games on loan from AC Milan in early 2000. He joined City that summer, but made just nine appearances after falling out with boss Joe Royle.
He previously won a sackful of trophies with AC Milan, Paris Saint-Germain and Monaco, and played 60 times for Liberia.
The former striker has already wowed vast crowds at rallies in capital city Monrovia.
Sam Mannah, a member of Weah’s campaign team, said: “George feels good and very keen. People everywhere tell him they want to see change.
“He stood for election in 2005, and then they said he lacked experience, but the fact he is now a senator plays a big role.

“His former football career helps him a lot. It reminds Liberians of a lot of good things.
“Back then he helped the nation, funded several hospitals, donated food, helped people move to America and even paid the national team’s players.
“People know what he has done, and see him as the man to change their lives.”
Liberian newspaper editor Othello Garblah added: “Weah is very popular. He promises to fight corruption, improve education and create jobs.
“All the candidates have similar programmes, so voters choose personalities. Weah’s popularity is down to what he did as a player.”
The election has several rounds, and the final result is expected at the weekend.
Follow Us on Twitter!