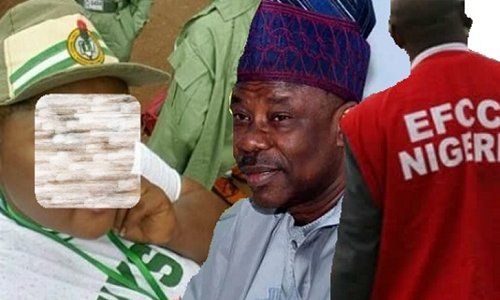 Governor Ibikunle Amosun of Ogun State yesterday described as untrue a report in a section of the media that a female youth corps member had a set of twins for him. The governor said the rumour gained so much currency that his mother – in-law had to call him to confirm if what she heard about a ‘second wife’ having twins for him was true or not. Amosun said he had been married to his wife, Olufunso Amosun, for about 26 years, noting that he had never kept a girlfriend, let alone having one that delivered twins for him.

He noted that the task of keeping one wife ‘’ is even challenging today in Nigeria and (he) had no plans whatsoever to double such challenges with additional baggage.’’ The governor vowed to fish out those spreading rumours and falsehoods against him, and have them sent to jail. According to Amosun, some unnamed politicians, who are aspiring to govern Ogun State in 2019 are responsible for the spate of falsehood churned out against him and his administration.

The Governor who cited the reported raid of his Lagos home by the Operatives of the Economic and Financial Crimes Commission (EFCC) as the latest in the series of falsehoods being circulated against him, vowed to smoke out the perpetrators and jail them. He also dismissed the purported raid on his home by EFCC as a ‘concoction of idiots’ while speaking at the June 12 Cultural Centre, Abeokuta, the Ogun State capital, during a town hall meeting of stakeholders for the 2018 Budget. The meeting was organized by the state’s Ministry of Budget and Planning for the purpose of collecting inputs of all stakeholders and build them into the preparation of the 2018 Executive Appropriation Bill, but Amosun used the avenue to clear air on rumours being circulated against him.
He said instead of those aspiring to govern the state to tell residents how they intend to transform the state and make it better, they have resorted to engaging some “idiots” who would sit in their room to concoct falsehood in the vain hope that lies and rumour mongering would help the governorship aspirations of their masters. Amosun also broke his silence on a case of a lady on National Youth Service Corps (NYSC) who was rumoured to have had twin – babies for him about a year ago. On the expected 2018 budget, Amosun said his administration would make judicious use of it, adding that he work round the clock to ensure that all ongoing programmes and projects were completed on or before May, 2019. He called on the Federal Government and the National Emergency Management Agency (NEMA), to make provision for special funds to be disbursed to some states which had put infrastructure in place to prevent flooding. According to him, giving fund and relief materials to the states ravaged by flood is good but others that put measures in place to avert flooding in their respective states should also be rewarded with fund as a form of encouragement.
The Nation
Follow Us on Twitter!