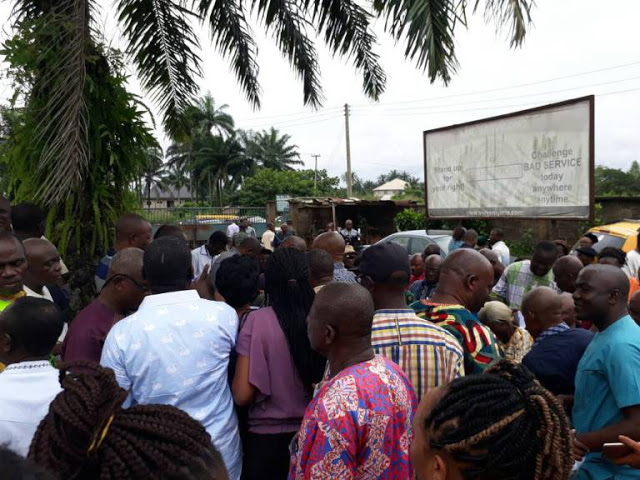 Four officials of the federal ministry of Power, Works and Housing have been accused of corruption by the Association Federal Housing Estate Amakama
Plot Allotees Umuahia Abia state chapter.
The group alleged that the lands allocated to them in 1999 by the federal ministry of works at the Estate which they were made to pay between Seven hundred thousands naira  and Four hundred Thousand naira for each plot have been reallocated to new persons by the officials of the ministry of works without refund.
The association gave the names of the officials of ministry of works as Engr. Obi, Mr. Alex Edem, Mr. Uduma and Mr. John Akaleme and disclosed that it has protested to relevenat authorities, including petitioning the Independent Corrupt Practices and other related offence Commission,(ICPC) to investigate  the funds paid to the officials of the ministry.
Speaking jointly to newsmen last week in Umuahia, the state capital, the chairman of Federal Housing Estate Amakama Plot Allotees Association Umuahia chapter, Mr. Goddy Ekezie and the secretary, Barrister Uwadineke Kalu explained that “our members were alloted plots of land at the federal Housing Estate, Amakama starting from 1999/2000 by the officials of the federal ministry of works and Housing.Our members were made to pay between Four hundred thousand naira and Seven hundred Thousand naira for each plot contrary to the federal government of Nigeria regulation”.
“Our members were respectively issued Allocation papers bearing plot number, block number and Specific site of Allocation. We have documents covering Amakama 1, Amakama11 and Evangel sites. We were around 2009 and 2012, directed by one Prince Alex Edem, the zonal Town Planning officer in active liaison with the then comptroller of works and housing, one Engr. A.C Obi to pay various sums of money ranging from Eighty-five thousand naira to Two hundred and fifty thousand naira for each plot as development fee”.

” The officials of the ministry, from Engr. Obi, Mr. Alex Edem, Mr. Uduma and Mr. John Akaleme encouraged our members to pay these sums into various Banks for them to use the payments in opening the site’s access roads, construction of drainages and payments of compensation to the original landowners. We were cajoled into compliance. What has happened to our money which runs into millions of naira we do not know being that the federal government awarded contract for the provision of the site services earlier paid for by us”.
They continued:”We were surprised that the ministry commencing from about the last quarter of 2016 began reallocating of the plots, earlier allocated to our members to new persons and interests who we learnt are now paying between two point five million naira and three million naira”.
“These fresh allotees are being shown their plots and are presently fencing and constructing buildings on some of these plots on site while our members are being cowed into believing that the ministry will open up Evangel site and accommodate everyone of us there. Prince Alex Edem, zonal town planning officer forgot that between 1999/2000 and 2005, he also gave out Allocation papers for the Evangel site to even some of our members”.
They said it remained law making citizens and pleaded that the committee set up to investigate the matter do a thorough job.
They implored the committee to take up their cause with the federal authorities and save members investments which has remained unrealized for almost twenty years.

The groups insisted that officials of the federal ministry of works and housing found wanting in the matter should be properly punished, especially now the present government is fighting corruption.
” We insist that Prince Alex Edem, the zonal town planning officer, Mr. John Akaleme, Mr. Uduma, the comptroller of Housing and all other officials of the ministry found wanting in this matter should be sanctioned”.
They demanded that their plots  be given to them following their Allocation Papers strictly or the sums contributed by them should be properly accounted for.
They equally demanded that the federal Housing Estate, Amakama and Evangel sites should be left for or returned to their members.
Meanwhile, the chairman land use and Allocation committee  of the federal ministry of Power, works and Housing, Mr. Godwin Ityoachimin has assured members of the federal Housing Estate, Amakama Plot Allottees Assciation, Umuahia Abia state that the federal government is looking into their matter, assuring that after its investiagtion, the committee do justice in the land dispute.
Ityoachimin gave the assurance last week when the committee met members of the association numbering 500 at the federal ministry of Works and Housing premises in Umuahia advised the association to give the committee time to carry out its assignment.
Mr Ityoachimin and his team on arrival, inspected the Federal Housing Estate Amakama, and Evangel sites, where the said reallocation plots took place.