Home » news » Defence Minister Tells Kanu; But You Vowed To Tear Down Nigeria – Reveals Why They Tag IPOB Terrorist Group, See Their Next Move From Monday

Defence Minister Tells Kanu; But You Vowed To Tear Down Nigeria – Reveals Why They Tag IPOB Terrorist Group, See Their Next Move From Monday 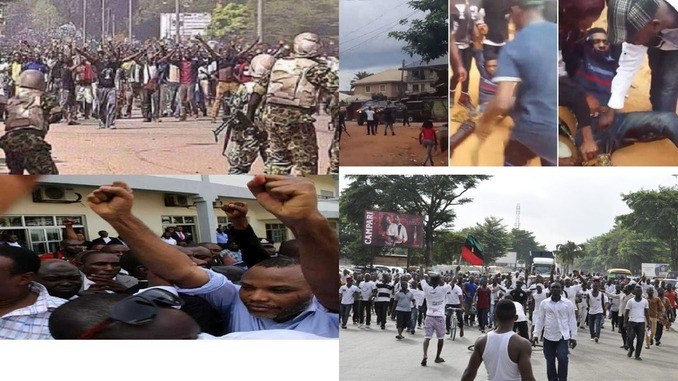 Mansur Dan-Ali said IPOB has shown it is a terrorist group, the minister of defence said there was intelligence report to support this
He said the group had threatened the unity of the country Mansur Dan-Ali who is the minister of defence has said that the Indigenous people Of Biafra (IPOB) was tagged a terrorist group because it threatened the security of the country.
Dan-Ali who spoke on Channels Television’s ‘Question Time’ noted that they had gathered intelligence report that indicated that IPOB was a threat to the country.
Nnamdi Kanu who is the leader of the group has insisted that it was either they get Biafra or nothing and the minister has accused the group of not going about their agitation in the right way. He said: “IPOB had intention.
They saw military coming to do their normal constitutional job, and then they interrupted. “They (IPOB) have the Intention of disorganising and bringing chaos in the country. “The Defence Headquarters of the Armed Forces did their analysis and there are so many factors that indicated that this IPOB group is not a peace-loving group because they have gone far beyond what is expected of a peaceful group.
“Why do I say so? “There are so many things they came up with. They mentioned that they are forming national guards; they have formed intelligence and what you call security forces.
They have even gone beyond that to come up on social media to say that if their agitation is not meant, they are going to bring down tools across the country. So does any group that has peaceful intentions go to that extent?

“Here, we have so many indices that we used in labelling them as a terrorist group. One of them, like I said, any group that goes beyond peaceful and constitutional means of getting things is a problem.” “Secondly, this is a group
I will now talk to you as a Nigerian, not even a Defence Minister – that wants to bring chaos, confusion into the nation. Will you allow that or will you go with that group?” Asked whether the government followed due process in labelling IPOB a terrorist group, he said: “What due process do you need to bring down a group that wants to bring chaos into a nation?
“I will give you an example. There is a video that is circulating that the Hausa man is being beaten by the South-Easterners. They wanted a repercussion and that is the same issue to be repeated in the North.
These are some of the issues that people (don’t understand). There are so many intelligence reports of what they are doing. “Even if you carry arms, or try to move arms from the security forces, is it one of the problems, I mean (conditions), for a group to be labelled?
What of hate speeches? There are so many hate speeches all over the place to bring confusion in the country.
“Also, threatening the Armed Forces with fuel bomb is also part of it. So, constitutionally, they should have due process in whatever agitation they have. But they didn’t do it; they decided to go by force.
They even mentioned, to some extent, they go to the public and say that if their demands are not met, they will bring the country to a standstill. Is that what should be allowed?”
Follow Us on Twitter!