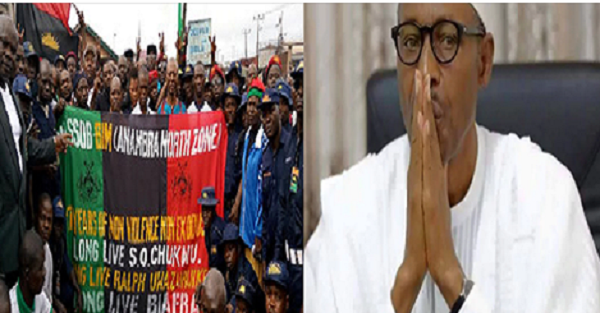 The Movement for the Actualization of the Sovereign state of Biafran, MASSOB, described President Buhari’s payment of pension to ex-Biafra policemen as an administration of medicine after death.
MASSOB in a statement ‎made available, Thursday, through its National Director of Publicity, Samuel Edeson also said President Buhari ‎use the carrot to placate what it alleged as Nigeria government’s atrocities against Ndigbo and Biafra.
The statement reads: “‎the directive which, he order that ex- Biafra policemen should be paid is medicine after death.
“For forty seven years after the civil war this men have been denied their right. Why must it be now because president Buhari feel by doing so Ndigbo and Biafrans will praise him or we will forget the atrocity he committed against Ndi Igbo.

“Ndi Igbo and Biafrans cannot be bought over with money, time for negotiation is over when Nigeria government was suppose to negotiate with Biafra agitators for peaceful co – existence between the two nations.

“They taught that we are joking. Is too late to cry when the head is off. President Buhari decided to pay ex- Biafran Police their accumulated salaries because of the danger before him. The United States of America team of Lawyers have dragged him and the Chief of army staff to International criminal court, ICC.
“President Buhari and the Chief of Army staff, General Burutai must face criminal charges for their involvement in the genocide committed against Ndi Igbo.
“Just a month ago he ordered Nigerian Army to kill our people in the name of operation python Dance II, a week later you turn back to give order that ex- Biafrans police/soilders should be paid what the Federal government is owing them.
“President Buhari supported the creation of Palestine State from Isreal and the also the creation of western saharie from morocco but fighting against the Biafra freedom but thank God because the international communities are interested in our case.
“Biafra has gone beyond Buhari’s imagination. No amount of intimation, arrest, detentions and tagging of terrorists will deter us from the pursuit of a Biafra Republic.”