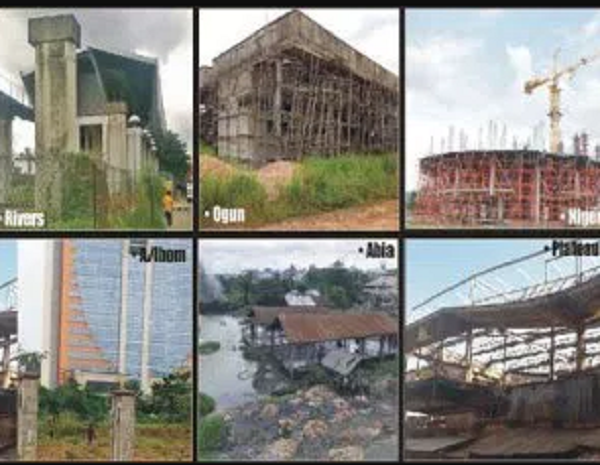 ​Some mega projects worth billions of naira, which were initiated by previous governments in seven states, have been abandoned by the current state governments.
The Nation investigation in Abia, Rivers, Niger, Ogun, Plateau, Bayelsa and Akwa Ibom states revealed that the projects, abandoned at different levels of execution, are left to rot away, even as some of them now harbour criminals, reptiles and other dangerous animals. Most of the projects, we learnt, were initially financed through loans, some of which are still being paid or serviced by the affected states.
For example, the Monorail Project in Rivers State, which was conceived and began by the former governor of the state, now Minister of Transportation, Chibuike Rotimi Amaechi, in his first tenure as governor in 2008, was designed to cover 12 kilometres at the cost of N50 billion.
It was however abandoned at the point of 2.6 kilometres when the former governor completed his second tenure in office. Sources said the work already done as at then, which was described as Phase 1A, gulped N33.9billion.
Since Amaechi left office, the project has been abandoned as the current government, led by Governor Nyesom Wike, has continuously exchanged hot words with the former governor over the project. The current government has, for example, alleged that the cost of the project, compared with similar projects in other states, was outrageous.

In Niger State, we learnt that at inception, the Minna Airport City Project was estimated to cost a whopping $600 million but when The Nation correspondent visited the state Ministry of Works, Lands and Housing and the agency handling the project to uncover how much has been expended on the project, no one was ready to give out information about it.
Governor Abubakar Sani Bello has however said pointedly that there were no resources in the state now to complete such a project, insisting that the available resources in the state will instead be channelled to other viable areas.
Another mega project abandoned in the state is the Minna Hotel. The cost of the construction of the five-star hotel was put at N19.6 billion. Although the government had issued a bank guarantee of N1.4 billion and a land worth N400 million, The Nation observed that the hotel remains as it is since former Governor Mu’azu Babangida Aliyu left office.

Bayelsa International Hotel in Yenagoa, Bayelsa State and Enyimba International Hotel in Aba, Abia State, have suffered similar fate. Our investigation confirmed that although Bayelsa Hotel was one of the projects used by former governor Timipre Sylva to secure a N50 billion loan from the capital market in December 2009, it is still an abandoned project. A report by the Financial Management Review Committee, chaired by the former Managing Director, Niger Delta Development Commission (NDDC), Timi Alaibe, shows that the cost of the project was N13.9 billion. The report also showed that the project was rated 26 percent completion when the bond was obtained. ”
For Abia International Hotels, which was initiated by former governor Sam Mbakwe government, over 38 years ago, we learnt that another $25 million would be needed to expand and complete it.
Jos Main Market, another abandoned project, according to our sources, would need N5billion to rebuild. But the state government said it does not have such money and so has opted to engage investors under Private Public Partnership (PPP).
Some of the state governments, who vowed not to touch the abandoned projects, said they were mere elephant projects initiated by former government who may have used them to siphon resources. (Continued on page 46)
Original estimated costs of the abandoned projects
*Rivers Monorail–N50b
*Minna Airport City-$600m
*Minna five-star Hotel – N19.6b
*Abia Int’l Hotel –N6b to complete * would need about $25m to expand
*Jos Main Market — N5b to rebuild
* Bayelsa Hotel —N13.9b
* Ibom Tropicana —N33b
* Ibom Specialist Hospital (completed but shut down)—- N41b
***
Via The Nation
Follow Us on Twitter!