EXPOSED: How Buhari's Minister, Former First Lady Begged Me To Spare Maina - EFCC Operative Opens Up As Maina's Exploit In Corridors Of Power For 23yrs Revealed 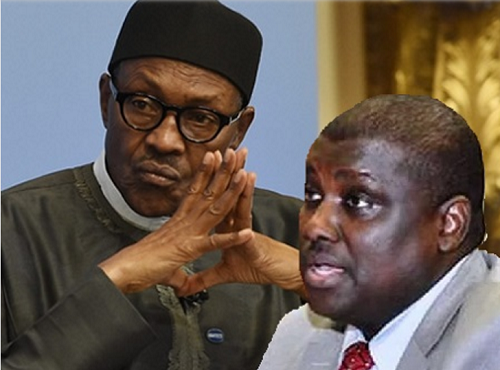 The row over the dismissed former chairman of the Presidential Task Force on Pension Reforms Task Team, Mr. Abdulrasheed Abdullahi Maina, has deepened with fresh facts emerging that a minister begged a detective to spare the suspect.
There were indications yesterday that the minister might have played a vital role in the reinstatement of Maina.
Security agencies were also said to be probing allegation that Maina has a Nigerien passport, following an alert that he was smuggled out of the country through Niger Republic.
Investigation revealed that the controversy surrounding the reinstatement of Maina suggested complicity by many government officials and top security agents.
It was learnt that President Muhammadu Buhari would have to be “more painstaking” to be able to tackle the scandal now tagged MainaGate in some quarters.
A top source said: “President Muhammadu Buhari needs a comprehensive appraisal of the circumstances surrounding the reinstatement of Maina. A syndicate in the government was behind the whole saga.
“For instance, a minister had met with an EFCC operative, who was coordinating the investigation of Maina, to spare the suspect. This was done before the minister was inaugurated as a FEC member.
“The said minister specifically demanded that Maina’s case be closed and the suspect should be used as a prosecution witness. He said Maina would make vital documents available to assist the EFCC.
“The said session was held at the private office of the minister in Garki part of Abuja. But the operative, who was shocked by the plea, refused to cooperate with the minister.
“If the government digs well, the operative (who has left the services of EFCC) can be recalled to give evidence on how and where the minister met him.”
The source said apart from the minister, Maina was even closer to a former First Lady who did everything she could to protect him.
And when the EFCC probe was intense on Maina, the ex-First Lady was said to have prevailed on “the stubborn detective” to stop the investigation.
The source added: “Also, a former First Lady had tried to influence the EFCC on the investigation of Maina by mounting pressure on the same detective. This happened when CP Ibrahim Lamorde was the chairman of EFCC.
“When the operative was adamant, the ex-First Lady allegedly engineered a petition against the operative by claiming that he collected N50 million from Maina.
“The EFCC and other agencies investigated the bribery allegation and absolved the operative of any infraction.
Findings however confirmed that Maina had been around the corridors of power in the last 23 years.
Another source said: ”Maina is not new to the corridors of power. He had wielded influence in Aso Rock since the dictatorial regime of the late Head of State, Gen. Sani Abacha.
“He knows every nook and cranny of Aso Rock, so he is used to floating in the seat of power, even during the administrations of ex-Head of State, Gen. Abdulsalami Abubakar and ex-President Olusegun Obasanjo before he was cut to size when Obasanjo was in charge.

“Some forces in power also have been using him for a purpose which suited their interest. There is no security agency or the police hierarchy where he does not have contacts.
“Everybody is denying Maina now, but he is a public officer who knows many people. He also keeps records of those who have benefitted from him.”
At press time, there were indications that Maina has a Nigerien passport.
It was gathered that he re-entered the country from exile in Dubai through Niger Republic.
A third source said: “There is no record of his return to the country at any airport in Nigeria. Security agencies are looking at some clues which pointed to the fact that he might have used Niger Republic to come back home.
“He is used to Niger Republic’s routes for escapades. He was said to have been smuggled out again to an unknown destination through one of the same routes.”
Family sources told one of our correspondents yesterday that Maina’s family had concluded plans to drag the (EFCC) to court for harassing their son
EFCC operatives in Kaduna had on Monday and Tuesday sealed six houses, including a two-storey office complex belonging to Maina, within the Kaduna metropolis.
The family had also addressed a press conference where they cried out that their son was only being persecuted by corrupt elements in President Muhammadu Buhari’s government, threatening that Maina would soon open a can of worms capable of nailing the cabals in his pursuit.
Spokesman of the Maina family, Malam Aliyu Maina, who addressed newsmen on behalf of the family said that the marking of the houses they inherited from their father in Kaduna by EFCC was not only wrong but illegal.
Speaking with one of our correspondents in a telephone interview yesterday, Maina family’s lawyer, Sani Katu, said the family had concluded plans to sue the anti-graft agency over the recent development.
He disclosed that filing of the court papers process had since commenced and would be made public as soon as the case is filed in court.
According to him, “we have commenced the process of filing the case, and as soon as we are filing the case in court, we will let the press know. That is the update for now.”
Meanwhile, the Kaduna zone of the Economic and Financial Crimes Commission (EFCC) said investigation was still ongoing to discover more of Maina’s properties.
An official of the commission in Kaduna, Ibrahim Kamilu, told The Nation that “we are still carrying out our investigation, and once more of his properties are discovered, they will be sealed.”
Follow Us on Twitter!