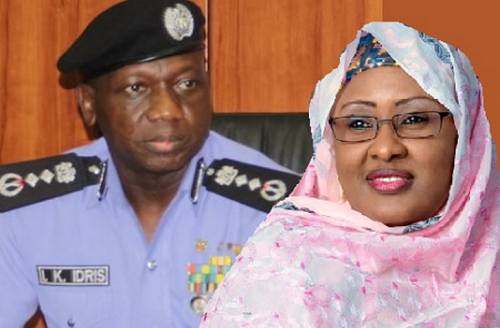 Senator representing Bauchi Central, Isa Hamma Misau, has accused the Inspector General of Police (IGP), Ibrahim Idris, of being behind the leaked documents which exposed Wife of the President, Aisha Buhari, as a recipient of proceeds of fraud
In a statement issued in Abuja, Senator Misau pointed out that his comment on approval of two jeeps, SUVs, by the IGP for the President’s wife was in reference to court documents filed in the charge against him by the Inspector General of Police and the Attorney General of the Federation.

“The said documents, which form part of the proof of evidence to the charge, are correspondences between the Inspector General of Police and the following: the President and C-in-C of the Federation; The Chief of Staff to the President; the Director, National Institute of Policy and Strategic Studies; the ADC to the wife of the President; and the Chief Personal Security Officer to the President.”
Senator Misau further accused the IGP of blackmailing the President’s wife and other high ranking personalities by deliberately and unethically exposing their correspondences.
He said, “It was, indeed, a shock to me, as I’m sure it is to other Nigerians to see such private and confidential documents with all the minutes of the President and other top government officials carelessly displayed in the public by the Inspector General of Police in manifest breach of official secrecy.

“The motive for displaying these documents is no doubt suspicious, given that they have little or no bearing on the matter of inappropriate practices within the Police.
“My submission before the Senate Ad hoc Committee was simply to call the attention of members as well as the general public to how the IGP is unethically dropping names through filing of secret documents so as to rope these top ranking innocent personalities into the case.
“The IGP is the one who submitted the official documents mentioning the names of respected personalities, not me. I believe I need to make this clarification.”
Follow Us on Twitter!