Home » news » EXPOSED! Secret Details Why They Want Jonathan to Appear in Court as Witness in Olisa Metuh’s Trial

EXPOSED! Secret Details Why They Want Jonathan to Appear in Court as Witness in Olisa Metuh’s Trial 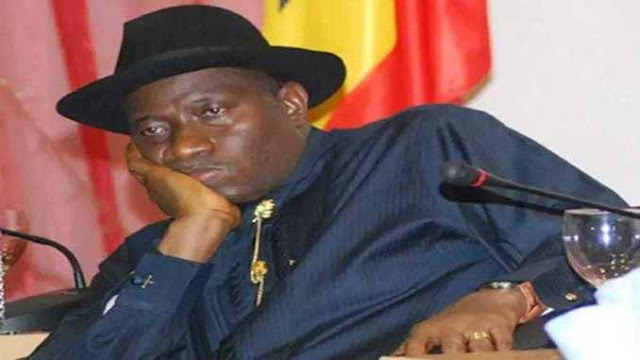 The Federal High Court in Abuja on Monday ordered President Goodluck Jonathan to appear before it to testify as a witness in defence of a former National Publicity Secretary of the Peoples Democratic Party, Chief Olisa Metuh.
A court official confided in our correspondent that Metuh’s legal team filed the draft subpoena before Justice Okon Abang shortly after the Monday’s proceedings.
The court official said the judge signed the subpoena after retiring to his chambers at the end of Monday’s proceedings.
The source, however, indicated that Jonathan’s court appearance on Wednesday would be dependent on whether or not he would be served with the subpoena signed by the judge between Monday and today (Tuesday).
It was learnt that the Abuja home of the ex-President was indicated on the subpoena as his service address.
The source said, “I can authoritatively tell you that Metuh’s legal team filed the subpoena before the judge on Monday and the judge signed the subpoena promptly after the proceedings on Monday.
“The judge indicated in the subpoena that the former President should appear in court on Wednesday.
“But whether or not the former President would appear in court on Wednesday would be dependent on if the court bailiff will be able to serve him at his home in Abuja between Monday and the end of Tuesday.”
Metuh, through his lead counsel, Dr. Onyechi Ikpeazu (SAN), told the court on Monday that he would seek to subpoena the ex-President as a witness.
Most of Metuh’s defence witnesses, including Mr. Ben Nwosu, who ended his testimony earlier on Monday, had insisted that the N400m paid to the ex-spokesperson for the PDP from the Office of the National Security Adviser in November 2014, (the money being part of the case against Metuh), was directly authorised by Jonathan.
Metuh’s lawyer, Dr. Onyechi Ikpeazu (SAN), told Justice Abang that he had written formally to Jonathan notifying him of his intention to have him testify in court but that the former President did not reply to his letter.
Ikpeazu said this while responding to questions raised by Justice Abang after Nwosu ended his testimony on Monday.
The SAN said he intended to apply for subpoena to be issued on Jonathan after the detained former National Security Adviser, Sambo Dasuki, earlier summoned to testify as Metuh’s witness would have ended his testimony.
He said, “We have another witness on subpoena, and at the end of the evidence of this another witness, we will take a decision on whether or not the first defendant (Metuh) will testify.
“The other witness we want to subpoena is Goodluck Jonathan, former President of the Federal Republic of Nigeria.”
Responding to further questions from the judge, Ikpeazu said, “We wrote him a letter but he did not respond and our plan will be to apply for the subpoena after the first application (for subpoena to be issued on Dasuki).”
Although Ikpeazu said Dasuki was scheduled to be the next to testify for the defence, the ex-NSA was absent from court on Monday.
Justice Abang said on Monday that Dasuki was scheduled to appear in court on October 25 (Wednesday).
The judge had earlier refused to grant Metuh’s request to sign the subpoena to be served on Dasuki.
But the Court of Appeal in Abuja on September 29 overruled the judge and ordered him to sign the subpoena.
Justice Abang noted on Monday that he had since October 3 complied with the Court of Appeal’s order by signing the subpoena which was said to have been subsequently served on Dasuki in DSS custody.
But Dasuki’s lawyer, Mr. Ahmed Raji (SAN), was however in court to oppose the request to compel the ex-NSA to testify as Metuh’s defence witness.

Raji told Justice Abang that he had on behalf Dasuki filed a motion on October 20, seeking an order setting aside the subpoena served on the ex-NSA to testify in Metuh’s defence.
While introducing the application on Monday, Raji said Dasuki had asked as an alternative prayer in the application, an order of stay of execution of the subpoena served on the detainee pending his (Dasuki’s) release from the custody of the DSS.
The DSS has detained Dasuki since December 2015 after the ex-NSA was granted bail in respect of two separate sets of charges instituted against him before the High Court of the Federal Capital Territory.
Justice Abang fixed Tuesday for the hearing of the application.
The Court of Appeal in Abuja had on September 29, ordered the DSS to produce Dasuki before the court in Abuja to enable him to testify as Metuh’s witness.
It was stated in an affidavit deposed to by a lawyer in Dasuki’s legal team, Mr. David Ogundipe, and filed in support of the application that the protracted incarceration of the ex-NSA had negatively impacted on his (Dasuki’s) state of mind making him allegedly unfit to stand trial or give evidence in respect of Metuh’s case.
It stated that with his incarceration since 2015, he had been deprived of access to files and records he kept while in office.
He also argued that Dasuki had not been served with the judgment or the enrolled order of the Court of Appeal ordering the ex-NSA to appear in court, adding that “his (Dasuki) state of mind is currently in turmoil, because of the protracted unlawful detention by the DSS.”
Ogundipe stated, “I also know that the protracted and arbitrary detention of the applicant (Metuh) has negatively impacted on his state of mind, such that makes him unfit to stand any trial now or give evidence relating to his actions or omissions in office.
“I am aware as a matter of fact that since 2015 when the applicant was arrested, he has not had access to any of the files or records he kept while in office, for the purpose of preparing his defence, including giving evidence in any case.”
He also noted that his appeals challenging his incarceration while being subjected to trial were pending before the Supreme Court and would come up for hearing before the apex court on January 25, 2018.
He added that compelling him to testify in Metuh’s case would therefore prejudice his right to fair hearing.
“Determination of the pending Appeals in Supreme Court is cardinal to a continued trial of Exhibits A1,A2 and A3, which by extension, squarely affects the purpose for which the subpoena has been issued.
“Applicant’s constitutional right to fair hearing/fair trial will be adversely prejudiced if compelled to testify or give evidence of this court, in disregard of the appeals already set down for hearing at the Supreme Court on January 25, 2018..”
The EFCC, had in January 2016, arraigned Metuh and his company, Destra Investments Limited, on seven counts of money laundering involving alleged cash transaction of $2m and fraudulent receipt of N400m meant for the procurement of arms from the NSA office on November 22, 2014.
The prosecution alleged in the charges that Metuh and his firm used the N400m for PDP’s campaign activities.
Follow Us on Twitter!