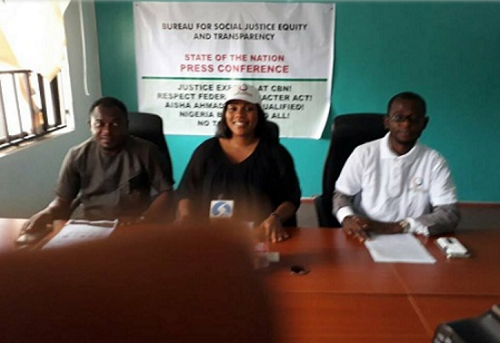 The Bureau for Social Justice Equity and Transparency has urged President Muhammadu Buhari to nominate another person for the position of the Deputy Governor for the Central Bank of Nigeria, CBN.
The group said Aisha Ahmad nominated last week is not qualified for the job.
The Executive Director of the group, Mary Ogwiji who spoke with newsmen in Abuja said an injustice that is about to be institutionalized in the country through the appointment of an unqualified candidate as deputy governor of the central bank of Nigeria in the midst of qualified and competent alternatives.

She said, "this situation is very worrisome especially coming at a time that the country is in dire need of credible technocrats in the most critical sectors of the economy such as the central bank of Nigeria.
"We view the appointment of Ms Aisha Ahmad as a calculated attempt by a cabal to destroy the milestone progress so far made by president Buhari administration to reposition the country’s economy, to which Nigerians have expressed satisfaction.
" Therefore on the heels of this economic recovery, at this critical moment of our nation’s history, it will be counterproductive to allow the appointment of an inexperienced Aisha Ahmad to see the light of the day given the enormity of task and responsibility the office usually thrust upon its occupants and given the fact that there are eminently qualified people within CBN and outside to take up the place of the retiring Sarah Alade as deputy governor.
"We are to state here that Aisha Ahmad does not meet the minimum requirement stipulated for such appointment hence her hurried promotion to the post of executive director at diamond bank in a space of days upon the anticipation that she would be considered for further appointment as deputy governor of the central bank of Nigeria.

"This sort of conspiracy against the positive economic trajectoryof the nation smirks of mischief, callousness and is retrogressive. This country under President Muhammadu Buhari administration cannot be left in the hands of internal saboteurs parading and masquerading as supporters of the president.
"Mr president is an international identity on integrity, rule of law and that image gives and sustains our credibility in the Face of international gatherings and consortium, therefore any attempt by any group of power merchants to puncture this hard earned image of the president and the country by giving ill advise to him will and must be rejected, condemned and reprimanded. We are aware that MrPresident was not properly briefed on the qualification or otherwise of Ms Aisha Ahmad. We are also aware that Mr President was not properly briefed on the availability of more qualified candidates. We are also aware that Mr President was wrongly and deliberately misled so as to achieve the first and most important point of internal sabotage which are all saboteurs in government seek to achieve.
"We Nigerians are saying this country does not belong to any single person or group or region. This country; Nigeria, remains an entity built on the blood, love, strength and unity of purpose of our forefathers. With this in mind, Nigerians will not allow a group of individuals in power to sectionalize or promote regionalism in appointments in critical sectors of the nation’s economy.
"Mr President is currently battling with sectional agitations in the country and any attempt to give a sense of exclusion to any part of the country would be seen by Nigerians as supporting sectionalism which in reality would be justified should the appointment of Aisha Ahmad not be reviewed. A situation were qualified people from other parts of the country loss out to an unqualified Aisha Ahmad signifies nothing but sectional and primordial sentiments which we believe are not the objectives of president Buhari administration.
"Ladies and gentleman, we have resolved to expose corruption and injustice in solidarity with Nigerians and our president so that the cankerworm does not kill us in this country. This is the only country that we have and this is the only president that listens to the voice of reason when injustice is advanced and about to be institutionalized. We are hopeful that Mr President will address the situation in Central bank of Nigeria as it is brought to his attention.
We are also calling on our over 12 million members to express hope in MrPresident that he would review his decision on the strength of the new information available to him on Ms Aisha Ahmads suitability and its appropriateness. We believe your Excellency was misled and so acted in error which can be quickly corrected. We also call on the Senate to consider the concerns of Nigerians and take a passionate and critical look into the allegations surrounding the appointment of Ms Aisha Ahmad as deputy governor of central bank before considering her confirmation.
"We believe the calibre of people in the nation’s apex bank should be competent so as to maintain confidence we currently enjoy from international financial institutions and global partners. We are hopeful and optimistic that this country and her institutions would not be personified or reduced to a mere instrument of political, religious or sectional patronage. We will ensure on our part that no group disrupts the good intentions of the president as long as he continues to carry everyone along in the spirit of all-inclusiveness, nationalism, unity and love in the collective interest of our dear nation’s prosperity.
"We so hope that Mr President would address this situation soonest to allay the fears of Nigerians"she said
Follow Us on Twitter!