How they stopped KACHIKWU's access to Buhari - VANGUARD reports 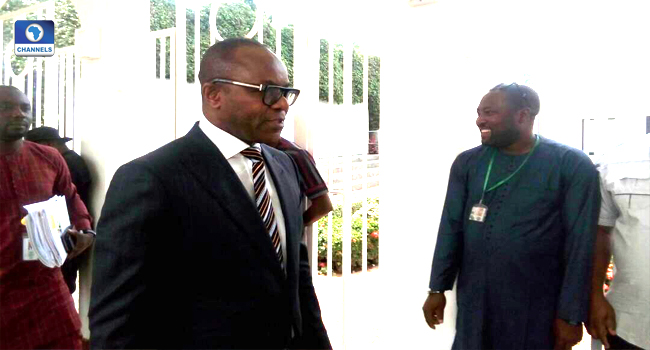 MANY things had been said about a powerful cabal running the Presidency by eminent Nigerians.
The First Lady, Aisha Buhari, hinted about the cabal, October, last year, when she declared that her husband’s government had been hijacked by a cabal, which was “behind presidential appointments.”
Her words: “The President does not know 45 of 50, for example, of the people he appointed and I don’t know them either despite being his wife for 27 years. Some people are sitting down at their homes folding their arms only for them to be called to come and head an agency or ministerial position.”
On return from London in June where she went to see her husband, still on medical vacation, Mrs. Buhari said: “God has answered the prayers of weaker animals.
The hyenas and the jackals will soon be sent out of the kingdom. We strongly believe in the prayers and support of the weaker animals.” One of the Nigerian leaders that have remained consistent on his claims that a cabal in Aso Rock has hijacked power from President Buhari is elder statesman and former lawmaker, Dr. Junaid Mohammed.
He unequivocally stated recently in a newspaper interview: “As it has emerged, Buhari cannot take firm decisions against the cabal running his government. In the end, the President is always trying to pacify the cabal and it is very sad.”
Last week, Dr. Ibe Kachikwu, the Minister of State in the Petroleum sector, adorning leopard-skin garments, emblematic of his Chieftaincy title of Odogwu (traditional prime minister) of his native Onicha Ugbo Kingdom, Aniocha North Local Government Area, Delta State, and   clutching a machete-like regalia, joined his   kinsmen to celebrate the New Yam festival.
It was an occasion for joviality and thankfulness, but the significance of the emergence of the Odogwu in leopard clothing was not lost on his people, who loved him for his contributions to the growth of the farming community.
However, it was a different scenario for Kachikwu when he prepared to return to Abuja after the festival, as a memorandum, sealed and delivered to President Muhammadu Buhari, August 30, pertaining to recent happenings in NNPC, had been leaked to the media. Kachikwu, in the memo lamented his inability to meet with the President since he didn’t have access to him any more.
Prior to his appointment as Minister and later, Chairman, NNPC Board, last year, Kachikwu was the immediate past GMD of NNPC. He was pulled from the Exxon-Mobil (Africa), where he was the Executive Vice-Chairman and General Counsel.
Aso Rock cabal
The national outcry about the inability of a Minister of Petroleum( Nigeria’s main foreign exchange earner), to say the least has been deafening. Kachikwu, a shrewd manager and bureaucrat has won the portrait of a man in a hurry to fix the sector with out-of-the-box ideas. But, the recent happenings are no surprise to those who have been following events since Kachikwu was surprisingly removed as NNPC GMD, last year.
A cabal at the Presidency had long branded Kachikwu anti-North, sponsor of militants and corrupt in his days as NNPC GMD and even as Minister of State for Petroleum.
Findings by Saturday Vanguard showed that President Buhari, who rummaged around   for a prudent goal getter to transform the NNPC on resumption of office got Kachikwu through a retired Northern army general and it took serious efforts on the part of the go-between to drag him out of his Exxon-Mobil office, which he was unwilling to vacate.
The cautious Kachikwu gave some conditions, which the President obliged him and was satisfied with his performance within months,   as  the GMD, who doubled as Minister of State for Petroleum. Kachikwu came out with reforms and strategies that impressed the President,   until the cabal started pushing to relieve him of the GMD portfolio.
“The truth is that some people have always seen NNPC as a cash cow and the kind of reforms/due process Kachikwu was putting in the place did not favour their plan.