Home » news » “I ve Never Entered My Office In The Last One Year”– Fayose Opens Up, Speaks To Nigerians 24hrs After Escaping Deadly Inferno!

“I ve Never Entered My Office In The Last One Year”– Fayose Opens Up, Speaks To Nigerians 24hrs After Escaping Deadly Inferno! 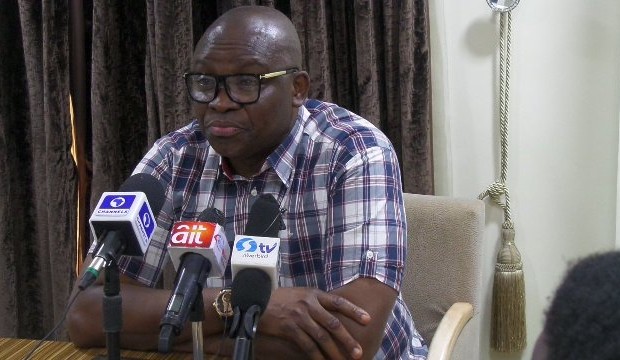 Ekiti state governor, Ayodele Fayose, has declined to comment over the recent incident in which his car was burnt, Vanguard reports.
One of the governor’s choice cars, his white Mercedes Benz G-Wagon was completely burnt down in Lagos on Wednesday, October 24.
However, the governor deflected comments on the issue as he addressed journalists in Ado-Ekiti, the Ekiti state capital, after the distribution of funds for developmental projects to communities in the state.
CURRENT NEWS NOW.com gathers that when he was asked to comment over the unfortunate incident, Fayose responded,
“I don’t want to comment on that.” At the event, Fayose instead, chose to focus on life after exiting power, telling his supporters that he would miss the Ekiti people after he leaves office.

He stated: “I will miss Ekiti people so dearly, because I have been used to them. I love finding myself in their midst and this is what I will miss sorely.”

Fayose disclosed that he would miss the support he got from the people pf the state, as he was a ‘grassroot governor’.
He stated further: “Do you know that I have not entered my office in the last one year? I have always been with the people on the streets to fraternize with them and that is the essence of leadership.
“No governor must rate himself higher than the people that elected him. Here in Ekiti, the people live mostly in the rural areas and they are not Lagos people but rural.
So we must interact with them and come to their level.
That is why you must support continuity project.”
Follow Us on Twitter!