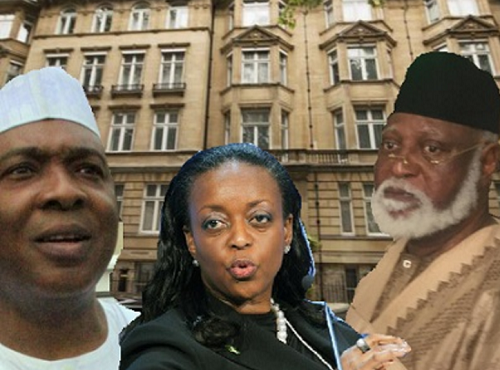 More details have emerged on 10 multimillion-pound properties owned by powerful Nigerian political elite in the United Kingdom, which were among those uncovered in a recent tour by ClampK, a group of anti-corruption campaigners.
A video clip of the tour by the anti-corruption campaigners, which included journalists, trended on the social media as it was reported by international media organisations, including the British Broadcasting Corporation, Al Jazeera and Agence France Presse.
The tour was aimed at exposing how the unexplained wealth of Nigeria’s political elite, among others,  has been used to buy expensive properties in the UK.
Further investigations by Saturday PUNCH have however revealed details of 10 properties belonging to five politically-exposed Nigerians in the UK.

The properties were linked to two top lawmakers, one of whom is also a chieftain of the All Progressives Congress; a former military Head of State; a late military Head of State; and a retired senior military officer, who is also a serving government official.
Out of the properties, our correspondents were able to get the cost of seven of them while the costs of others were said to be unavailable.
The cost of the seven properties is £15,785,000 (approximately N6,345, 570,000 using the Central Bank of Nigeria’s official rate of N402), while the costs of the properties can be broken down as: £5, 650, 000; £4,250,000; £2, 900,000; £850,000; £830,000; £820,000 and £485,000.
Investigations also revealed that the properties were acquired by proxy, which the anti-corruption campaigners believe was done to hide the identities of the owners.
Documents made available to Saturday PUNCH by HM Land Registry, Croydon, revealed that one of the choice properties linked to an APC chieftain cost £4,250,000 (apart from other rents that had been paid on the grant of the lease).
Another property belonging to one of the powerful Nigerians had cost £5, 650, 000 when it was paid for on October 4, 2011, according to the records of HM Land Registry, Croydon.
The leaseholders were identified as Renocon Property Development Limited and Sandon Developments Limited.
Documents from the HM Land Registry, Croydon, also revealed that a choice property was acquired by a firm on behalf of a former military Head of State.
Further information made available by the land registry revealed that a property linked to one of the powerful Nigerians was registered with a company’s name as the owner.
Similarly, findings from the HM Land Registry, Birkenhead office, UK, revealed that a property at Kensington West Blythe Road, was linked to one of the powerful Nigerians.

Findings from the HM Land Registry, Peterborough office, also revealed further information about a property that has been linked to a top lawmaker in the Peoples Democratic Party.
One of the anti-graft campaigners on the tour organised by ClampK, Rachel Davies of Transparency International, had described the UK as a ground that had been harbouring misused public funds, saying there were 40,000 land titles in London owned by companies based in many jurisdictions.
According to her, that meant “that when they bought the properties, the owners didn’t need to have a land registry to reveal who they really were and so the land registry, the police, and the local residents do not know who they are.”
In line with that, a source in the diplomatic community in the UK told Saturday PUNCH during the week that “there were many other properties linked to politically-exposed Nigerians” and that moves were being made to expose more in the future.
The source also said that though, the UK law enforcement agencies had been “secretive” about their activities; there were reasons to believe that they were “in the process of building a more expansive prosecution against a former Minister of Petroleum Resources, Diezani (Alison-Madueke),” who is said to be under investigation in the foreign country. However, the general belief of the group of the anti-graft campaigners that organised the tour, is that the UK government had failed to show enough commitment and political will to investigate and expose politically-exposed Nigerians using the foreign country as a haven to hide stolen funds.
In an email to Saturday PUNCH during the week, a consultant and former Nigeria specialist at the US State Department, Matthew Page, said, “The UK government doesn’t have the resources or the political will to pursue a broad range of investigations into the high-end property holdings of politically-exposed Nigerians or suspected kleptocrats from around the world.
“Government officials may be looking into a handful of the most high-profile examples, but they are doing little to tighten the laws and close the loopholes that help the world’s treasury looters buy posh homes in London.
“Many of us are concerned that the UK government is losing interest in stopping kleptocrats using the country’s property market, corporate structures, and financial system to launder and spend stolen money. I suspect UK officials see these kinds of financial activities as a necessary evil, that is, a much-needed alternative source of revenue that will help offset the negative economic and fiscal effects of Brexit.”
A similar tour organised earlier had focused on politically-exposed Russians. According to AFP, “the tours are organised by an anti-corruption campaigner, Roman Borisovich, who is a specialist in exposing shady Russian money, and are held every few months.”
It stated that Borisovich had set up the tours “to attract public attention to the enormous proportions of money laundering that is being washed through UK properties.”
He told AFP he had chosen Nigeria for the latest tour as it was “the only country that is openly asking the British government to repatriate the proceeds of crime, which were stolen from the country.”
The Executive Chairman, Centre for Anti-Corruption and Open Leadership, Mr. Debo Adeniran, said with the revelation, the Economic and Financial Crimes Commission and other anti-graft agencies should immediately open an investigation to discover public office holders who own the properties with a view to prosecuting them if found guilty.
He said, “The revelation is a manifestation of how greedy our politicians are. It’s a confirmation that our politicians go into the system to siphon public funds. Many of them have been doing it right from time. They launder the country’s funds and use them to buy posh properties abroad.
“This situation has been persistent because of the lack of commitment by our anti-graft agencies to investigate and prosecute corrupt politicians using public funds to buy choice properties abroad. If not, we didn’t have to wait for foreign investigators to do the job for us.
“Be that as it may, all the agencies, from the Economic and Financial Crimes Commission to the Independent Corrupt Practices and Other Related Offences Commission and even the Central Bank of Nigeria, should swing into action immediately and investigate those who own the properties and prosecute them if found guilty of corruption.
“For an administration whose motto is ‘fighting corruption,’ seeing that the proxies who illegally acquired properties for public office holders are also prosecuted should be a priority. The government should ensure that every sinner shouldn’t go unpunished.”
Also, the Executive Director, Socio-Economic Rights and Accountability Project, Adetokunbo Mumuni, said the fact that the said persons did the transaction or acquisition clandestinely showed that they had things to hide. He said the EFCC should waste no time in investigating the matter.
He said, “If you don’t have the gut to buy a property in your name and you are using proxies, that means you have something serious to hide and once there is a reason to believe that a crime has been committed, the appropriate criminal investigation agencies, like EFCC, must take it up.”
He added that Nigeria must stop relying on foreign help to solve all its problems, adding that “We must be ready to do something serious about our matters ourselves and that is why agencies like EFCC should take it up.”
Follow Us on Twitter!