Home » news » IPOB: Nothing like IPOB, even if they are spirits, security men are super ghosts - Garba Umar, Anambra CP declares

IPOB: Nothing like IPOB, even if they are spirits, security men are super ghosts - Garba Umar, Anambra CP declares 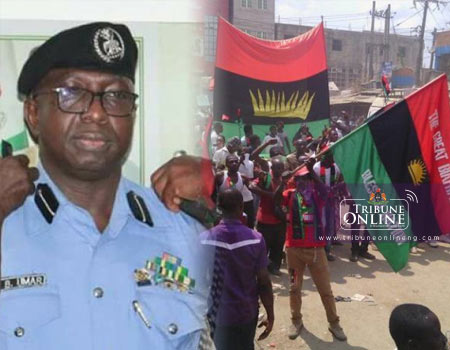 The Anambra State Commissioner of Police, Mr. Garba Umar, has reassured residents of the state of the command’s readiness to provide adequate security before, during and after the November 18 governorship election in the state.
He said his officers would go after anybody or group that would constitute a threat to the smooth conduct of the poll.
Umar, who is also the Chairman, Independent National Electoral Commission (INEC) Inter-Agency Consultative Committee on Election Security, gave the assurance yesterday at the end of their meeting at the INEC headquarters in Awka.

He said the meeting was a follow-up of the one held last month, noting that after reviewing security issues, it was certain that the coast was clear for a peaceful conduct of the election.
Umar dismissed the boycott threats by the Indigenous Peoples of Biafra (IPOB) as empty.
“There is nothing like IPOB, and even if they are spirits, security men are super ghosts and will go after them because security operatives are ready,” he said.
Follow Us on Twitter!