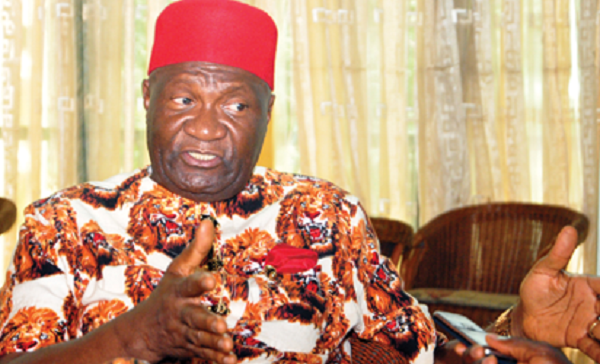 THE President-General of Ohanaeze Ndigbo, Chief John Nnia Nwodo, has said that the apex Igbo socio-cultural body supported the decision of the South-East Governors in proscribing activities of the Independent People of Biafra, IPOB, because the decision saved several lives and doused the explosive tension in Igboland.
Nwodo said that Ohanaeze saw the governors’ decision as very wise hence the need to align with their position to save the nation from what would have been a major crisis following the clash between IPOB members and soldiers.
According to the Ohanaeze leader, people, especially youths, misunderstand the action of South-East Governors in proscribing activities of the IPOB.
He said the governors took the action “out of a genuine desire to safeguard the lives of young people.”
Nwodo said in Igbo culture, when a father senses danger outside, he chases his children inside the house, locks them inside the house and waits for the danger to abate to ensure the safety of the children.
“That was what the governors did and Ohanaeze Ndigbo is happy with the wisdom showed by our governors. I am particularly pleased with the foresight of Governor Okezie Ikpeazu for timely imposition of a curfew on the commercial city of Aba. By that singular action, several lives were saved, and it helped to calm the tension down. Governor Ikpeazu, you are a wise man and we are grateful to you,” Chief Nwodo said.

He explained that without the action taken by the South East governors, the zone would still be engulfed in bloodshed, saying that Ohanaeze Ndigbo would not sit by and allow the youths of Igboland to be cut down prematurely. Nwodo who spoke in Umuahia at the third inauguration of the state and local government executive committees of the Abia State chapter of Ohanaeze Ndigbo, urged the youths to realise that the governors took the decision for their own good.
According to Nwodo, though no Igbo man is happy with their position in Nigeria, agitation for the restoration of Biafra was not Igbo agenda in the quest for a better deal in the Nigeria project. Chief Nwodo maintained that restructuring of the polity is and remains the position of Nidigbo hence the aggressive call for restructuring of the country to ensure equity and fairness to all sections of Nigeria.
The Ohanaeze president general reminded the youths that the restoration of Biafra was not an easy task but rather, a tall order given the constitutional roadblocks to cross. He said that pursuing Biafra restoration would not be in the overall interest of the Igbo in their socio-economic and political relationships with other sections of Nigerians.
Nwodo said,“We should forget Biafra and insist on restructuring.”

Though he said that there is no Igbo that is happy with the situation of things in Nigeria, he noted that “we must seek for peaceful ways of resolving the issues.”
He observed that while the youths were justified in expressing their anger at the way Ndigbo were being marginalized in national affairs, yet they should moderate their actions and words, pointing out that hate speeches would not resolve any problem. Insisting that Ohanaeze Ndigbo has nothing personal against the IPOB leader, Nnamdi Kanu, the president general explained that in their engagement with the leader of IPOB, he and his members were urged to tone down the choice of words, respect other people’s views and desist from denigrating people and groups.
Quest for restructuring
Nwodo also said that Kanu was reminded that his insistence on Biafra’s restoration and boycott of the Anambra election were not acceptable to Ndigbo and that he should drop his rigid position and join in the quest for restructuring.
In his remarks, Abia State governor, Dr. Okezie Ikpeazu, said that Nigeria and the world at large were passing through perilous times hence the need to seek for amicable ways to resolve issues.
“We believe in justice, equity and fairness. I believe in live and let live,” Governor Ikpeazu said, pointing out that nobody takes delight in being oppressed.
The governor advised Igbo youths to learn to respect leaders and listen to advice of elders instead of embarking on agitations to express their frustrations. Ikpeazu said that henceforth, youths and any Igbo person or group that has grievances should complain to Ohanaeze which would take the matter up with the appropriate authorities.
(Source: VANGUARD)
Follow Us on Twitter!