Home » news » Just In! Borno Women Condemn Secret Trial Of Boko Haram Suspects, Says It Should Be Made Public.

Just In! Borno Women Condemn Secret Trial Of Boko Haram Suspects, Says It Should Be Made Public. 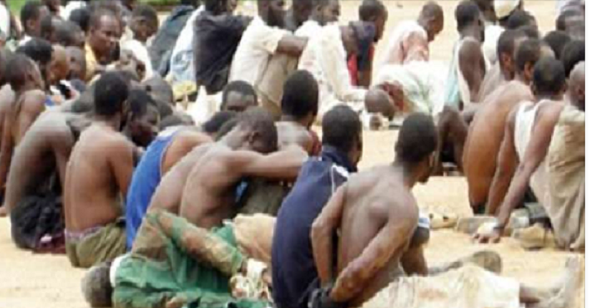 Some women in Maiduguri have called on the Federal Government to commit the Boko Haram suspects to public hearing as against the ongoing private trial.
A cross section of the women made the call while reacting to the trial of the suspects, on Monday in Maiduguri.
Ms Lucy Yunana, a women activist, said that the trial should be made public in view of the atrocities committed by the suspects against humanity.
Lucy said that the public hearing of the suspects would avail members of the public and victims of the insurgency to get justice.
“We the women of Borno, we say no to private trial of Boko haram suspects.
“As mothers, we are the victims of their heinous crimes and we want to witness the trial and see the enemies of peace.
“We call on the Federal and State Government to make the trial public,” she said.

Hajia Bintu Zanna, a mother, noted that women and children were most affected by the Boko Haram insurgency.
Bintu added that the private trial of the suspects would expose them to hardship, as the action infringed on their rights to justice.
However, Mr Bukar Amin, an Internally Displaced Persons (IDP), commended the government over the trial of the suspects.
Amin called on the Judges to be fair and just in the discharge of their duties.
“The trial would ensure that the culprits are punished according to the crimes they committed against us”.
Also commenting, Mr Jubril Gunda, a lawyer, said that the constitution had stipulated for private trial of suspects to guard against further breach of security.
Gunda explained that the law allowed for private trial of suspects in matters of concern to national security or sensitive gender and children issues.
He added that certain identified personalities such as counsels; prosecutions, relations of the accused as well as personnel on essential services were granted entry to witness the court proceedings.
Newsmen report that the Federal Ministry of Justice had began the trail of over 1, 600 Boko Haram suspects, who were in detention in the past eight years.
Two trial centres have been designated in Maiduguri and Kainji in Niger State.
The Nigerian Army had so far transferred 760 suspects to Borno State Government in the past seven days.
The military authorities said that the suspects were released to Borno Government for rehabilitation to facilitate their re-integration into the society.
It added that the suspects were cleared after investigations by the Military Joint Intelligent Committee (JIC).
Follow Us on Twitter!