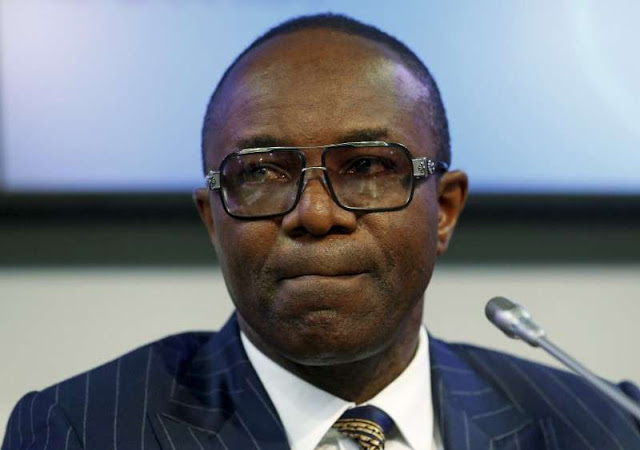 Minister of State for Petroleum Resources Ibe Kachikwu’s future was hanging in the balance yesterday.
President Muhammadu Buhari is said to be weighing options on Dr Kachikwu’s fate, following his allegations against Group Managing Director of the Nigerian National Petroleum Corporation (NNPC), Dr. Maikanti Baru.
Specifically, Kachikwu alleged that Baru
awarded $25b contracts unilaterally;
ran a bravado management; and
made appointments without consultations.
It was learnt that having found Baru not guilty of corrupt practices, the Presidency gave the GMD the clearance to release a fact-sheet in the matter to the public.
Kachikwu is said to be consulting his associates, stakeholders and colleagues on his next move. He has been cautioned against any act capable of being seen as confrontational, according to a source, who pleaded not to be named because of “the sensitivity of the matter”.
Kachikwu’s associates, it was learnt, cited the travails of ex-Minister of Petroleum Resources Prof. Tam David-West’s rough deals with the military administration of ex-President Ibrahim Babangida.
One of the alternatives being suggested by his friends is the possibility of voluntary exit from the cabinet “to preserve his integrity”. It was not clear last night the step Kachikwu would take after it was clear that the Presidency might have backed Baru.
The GMD of NNPC described the $25billion contract figure raised by Kachikwu as “humongous” because “no money was lost and no process has been breached.”

The President, The Nation learnt, felt scandalised by “unfounded allegations of corruption bordering on phantom $25billion contracts”.
The allegations allegedly attracted concerns from other nations and some oil producing countries.
President Buhari, who is said to have felt hurt, by the development, “refused to act on the spur of the moment because his image and the reputation of his administration were involved”.
A top government source said: “The Presidency directed the GMD of NNPC to provide facts and figures, which it got from Baru.
“Thereafter, the NNPC Act, the NNPC Handbook and Public Procurement Act were consulted on the responses of Baru to find out if infractions were committed by the corporation.
“Having been convinced that there were no infractions, the Presidency then directed NNPC to lay the cards on the table for Nigerians to see and judge.
“What was uppermost in the responses of the GMD was the fact that ‘there was no evidence of sharp practices, bribery, looting of funds and diversion of transaction cash’.
“The allegations of Kachikwu were rated as ‘wild, intentional and political in nature’ against the administration he is serving.”
It was learnt that the President met with Kachikwu last Friday to “be fair to the Minister and for record purposes”.
A Presidency source, who  spoke in confidence with our correspondent, said: “The President has not spoken on the next action. No one knows his mindset.”
Yesterday’s statement by the NNPC, which  was described as  an “assault” on Kachikwu by some of his associates, fuelled minister’s thoughts on his Option B which he did not state.
Some of Kachikwu’s confidants have, however, cautioned against any “hasty” decision, given the travails of a former Minister of Petroleum Resources, Prof. Tam David-West, during the military regime of ex-President Ibrahim Babangida.
A highly-placed stakeholder said: “I am aware that the minister has been holding consultations and telling some vital players in the oil sector what transpired.
“Of importance to him is the allegation of alleged plot to sabotage the government of President Buhari with the leakage of the August 20 memo. He has maintained his innocence that he did not leak the letter.
“But it is tragic that no one believes Kachikwu’s story anymore in the Presidency.”
The GMD yesterday dismissed the allegations of award of contracts without regard to due process as “unfounded” and “unfortunate”.
He described the $25billion contract figure raised by Kachikwu as “humongous” because “no money was lost and no process has been breached”.

He explained that as a former chairman of the NNPC Anti-Corruption Committee, he would be the last person to breach the procurement process by disregarding extant laws and rules.
The GMD said the NNPC Act and the Public Procurement Act vested procurement powers in the NNPC Tenders Board, the President and the Federal Executive Council (FEC), depending on the cost threshold.
He said the NNPC Board had no role whatsoever in the process.
He said: “I know for those of you who are following what we are doing here, you know that there’s no money lost and no process has been breached.”
Baru made his views known while receiving the National President of the Petroleum and Natural Gas Senior Staff Association of Nigeria (PENGASSAN), Comrade Francis Johnson, PENGASSAN members and members of the Nigeria Union of Petroleum and Natural Gas Workers (NUPENG).
The leaders of the unions were on a solidarity visit to Baru.
The unions’ visit came on the heels of the controversy sparked by Kachikwu’s letter to the President alleging non-adherence to due process by the Management of NNPC in some contract administration.
Baru said: “Our contracting process is perfect and we will continue to follow the process. The NNPC Board has no role, I repeat, has no role as far as the contracting process is concerned.
Baru said the NNPC Tenders Board was made up of the GMD as Chairman and the Group Executive Directors as members.
On the crude term contract and the DSDP agreements, he said: “These are not contract as such; they are essentially pre-qualification of off-takers of crude oil and in the case of DSDP, of those that will take crude and give us products in return. So there is no value to them.
“But humongous figures have been put forward mainly to incite the public, it is most unfortunate”.
On the allegation of lop-sided promotions, the GMD asked the union leaders if their members felt disenchanted to which the unionists chorused a resounding “no”.
He urged the union leaders to enlighten their members on the facts and encourage them to go about their duties without distraction.
Comrade Johnson said the unions’ support for the GMD was based on his ability to walk his talk since assuming office last year.
“The National body of PENGASSAN and all the NNPC in-house unions are here today to show our support for you. You have brought stability to the NNPC and we are happy today that staff morale is high. You were Chairman of NNPC Anti-Corruption Committee for over five years and that was what informed your appointment as GMD of NNPC. Today, all the bullets you are taking are on behalf of members of staff. We will continue to pray for you, God will continue to guide and shield you,” Comrade Johnson assured.
The PENGASSAN President called on Nigerians to be cautious of their comments on the controversy, adding that any wrong information was capable of discouraging investors from the oil and gas industry which is the highest foreign exchange earner.
The NNPC Group Chairman of PENGASSAN, Comrade Sale Abdullahi, who also spoke during the visit to the GMD, stated that their concern had to do with the need to protect not only the GMD but the NNPC as an institution.
He noted that Dr. Baru had streamlined the processes and procedures in the Corporation leading to the full restructuring which was beginning to yield positive results.
“Today, the GMD and NNPC Management receive input from staff and this gesture by Dr. Baru has given members of staff a sense of belonging. Today, our input are being implemented and we are highly motivated,” Comrade Abdullahi stated.
Supporting these positions, the Group Chairman of NNPC NUPENG, Comrade Udofia Odudu Benjamin, said the unions would continue to pray for divine guidance for Dr. Baru and the entire NNPC management
Earlier, the Chairman of NNPC Corporate Headquarters Chapter of PENGASSAN, Comrade Mathew Duru, reiterated the continued support of the unions for the Dr. Baru-led management.
“We just want to tell the GMD from the bottom of our hearts that we are with him and the Top Management; that we are behind the GMD who has done very well in turning the fortunes of the Corporation around”, the union leader said.
He said since Baru assumed office, he had succeeded in clearing the air of uncertainty that prevailed in the corporation because of visionless reforms that left NNPC on the brink of collapse.
He also said the GMD succeeded in resolving the NNPC Pension challenge that had led to disenchantment among staff.
He added: “We are with you. We want to let you know that you are not an orphan.”
(SOURCE:THE NATION)
Follow Us on Twitter!