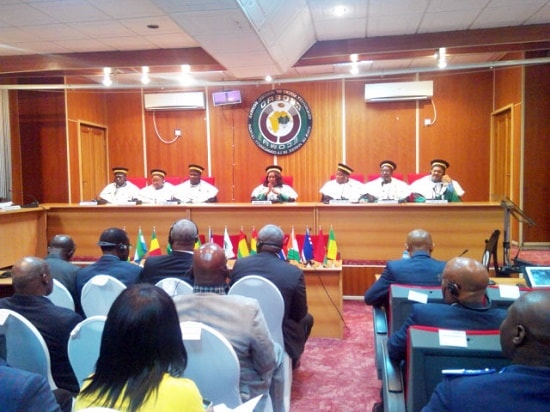 Dr Nelson Magbagbeola, ECOWAS Parliament Secretary-General says the parliament will continue to monitor the border of member countries to ensure the full implementation of the community´s protocol on free movement.
Magbagbeola stated this in an interview with the News Agency of Nigeria (NAN) at the end of the five-day ECOWAS Parliament 4th Legislature de-localised meeting in Niamey.
He said that the ECOWAS protocol on free movement had been a major challenge to the body with regards to its full implementation by member countries.
He added that citizens of member countries had continuously been harassed and asked to pay money to enter other countries.
“It is a serious challenge; but ECOWAS Parliament has taken it upon itself to be visiting the borders. We started in August, when we were in Lome.

“We visited the Lome border, Ghana border at Aflawo, we also went to the Lakunji Benin border, that is the border between Togo and Benin to sensitise the population.
“And we have also planned similar border visits by parliamentarians for Darkar, Bamako and Ouagadougou.
“´There are other ones for Guinea, Sierra Leone and Liberia so as to address these issues, meet with the operatives and find out what the challenges are,´´ he said.
He added that the parliament´s desire was for the ECOWAS to be a single economy space where people could move freely without any harassment.

Magbagbeola further added that though governments and the authorities of member countries had the political will to ratify the ECOWAS protocols, implementation of treaties had remained a major challenge.
“The political will is there but unfortunately because of poverty, the operatives demand for money and they lobby to be posted to the borders to make money,’’ he said.
He, however, added that sensitisation was going on to educate ECOWAS citizens that they were not expected to pay anything to move freely within the sub-region.
The ECOWAS Parliament Secretary-General pointed out that the de-localised meeting was very successful in terms of organisation and course content.
´´Instead of staying back in Abuja and talking about ECOWAS and people hearing about it, we brought it closer to the people.
´´Part of the programme was to engage with the authorities. We were with the President of the country and the Speaker of the National Assembly and also met with the Prime Minister,´´ he said.
Magbagbeola added that issues about migration and the free movement of persons and goods within the sub-region were extensively discussed at the meeting.
He said that the meeting also discussed issues concerning development and the need for a common currency as a way of bringing ECOWAS closer to the people.
The Secretary-General said that the parliament would continue to encourage women to take up elective positions, education for the girl-child and the training and re-training of women to get to high positions.
He added that the parliament would continue to give priority to issues concerning female gender mutilation, suppression of women rights and gender equality.
Follow Us on Twitter!