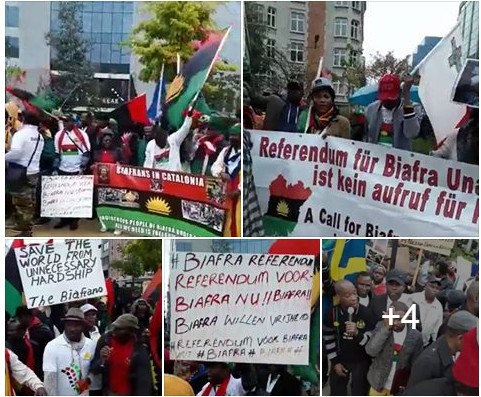 Yesterday, the 10th of October 2017, Indigenous People Of Biafra held a protest before the European Union headquarters in Brussels Belgium.
Reports reaching to Igbere TV from Afroinsider has it that IPOB officials were in a closed door meeting with European Union Officials for over 3 hours.
There is a new found love between the European (EU) Union and Indigenous People of Biafra (IPOB). While the British is leaving the EU, all is set for Biafra to leave the British Nigeria.
Apart from Turkey, Israel and the United States of America, the EU block seems to be 100% in support of a free Biafra.
The European Union through it’s President, Jean Claude Juncker was the first to reject the unilateral classification of IPOB as a terrorist organisation.

Also, in 2016, 16 executive members of the European union issued a commiunique requesting for the release of the leader of the Indigenous People of Biafra, Mazi Nnamdi Kanu.
It is expected that the European Union will work with the United Nations to facilitate a well organized referendum for the Biafrans whose freedom and independence is long of overdue.
See photos and videos from the European Union headquarters in Brussels below.