JUST IN: Soldiers arrest Bishop, 19 others arrested for armed robbery 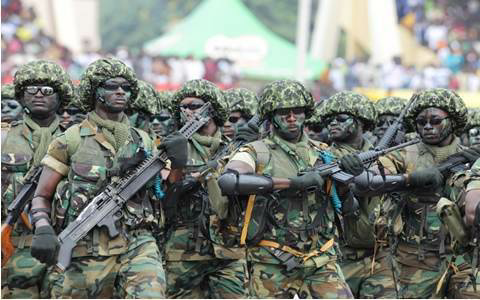 Nineteen people, among them, an ordained Bishop, have been arrested by troops of the Nigerian Army in the ongoing Operation Crocodile Smile II in the South-South and South West, for armed robbery, kidnapping and cult activities in Akwa Ibom State.
It was learned that the Bishop, identified as Uwah Mfon and other suspects who include Saviour Friday, Nsika Udoh, Akan Monday, Abak Obong and Oyobong Frank were arrested for allegedly terrorizing Abak Obong, Oruk Atai and Ikot Obong in Etim Ekpo Local Government Area of the state.


Deputy Director, Army/Public Relations, and 6 Division spokesman, Colonel Aminu Iliyasu, said the suspects, who were arrested by troops of 2 Brigade, have been handed over to the Police for prosecution. Iliyasu said bishop Mfon was allegedly believed to be a financier of wanted criminals terrorizing the areas.
“The bishop is believed to be the financier of wanted criminals. He was arrested in Ikot Ibekwe community.
“The suspect is volunteering information about gangs of kidnappers and cult members linked to him.
“All the suspects and recovered items have been handed over to relevant security agencies for possible prosecution while the operation continues,” said Iliyasu.
Follow Us on Twitter!