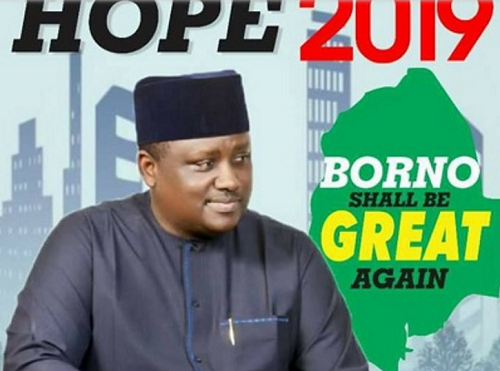 The WANTED fugitive pension boss, Abdulrasheed Maina's 2019 governorship posters have flooded some major streets in Kaduna and Abuja, report by Vanguard says
Though Maina remains underground apparently to avoid being arrested for prosecution by the Economic and Financial Crimes Commission, he is tactically working to actualize his ambition of ruling Borno State when the Independent National Electoral Commission gives the go-ahead for the electioneering campaigns for the 2019 polls.
According to Vanguard, one of the posters with Maina’s picture with a black caftan and black cap to match, posted at Apo Overhead Bridge adjourning the Apo Legislative Quarters, has dominant red and green colours, indicating that he is likely to pitch his tent with one of the parties with those colours.

The posters, which has the imprint of Borno Stakeholders’ Forum, has the caption: Hope 2019 and a promise: “Borno Shall be great Again and with Abdulrasheed Maina, Our Future is Guaranteed”.

Similar posters were pasted in some areas of Kaduna, where Maina’s family members reside and work. It was also in Kaduna, where the family members yesterday carpeted unnamed cabal in the Buhari administration, which they claimed, had invited Maina to come out of hiding and work with the government of Change only to be betrayed and persecuted.
Follow Us on Twitter!