Home » news » JUST IN: What Obiano Did Concerning Army Medical Treatment In Anambra State Yesterday, Will Shock You {Must Read}

JUST IN: What Obiano Did Concerning Army Medical Treatment In Anambra State Yesterday, Will Shock You {Must Read} 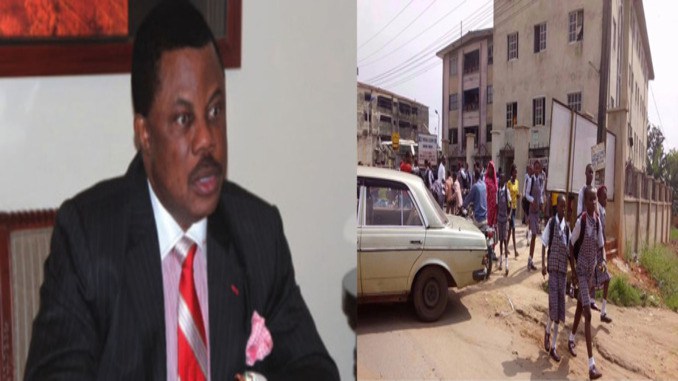 Governor Willie Obiano has allayed fear about army medical outreach in the state, Some students were said to have fled their schools when army arrived for its medical outreach
The governor, however, called for immediate stoppage of the medical outreach until wide sensitization is conducted to reassure people of its intentions and benefits
The Anambra state government has debunked the rumour making round the state that the students in Ozubulu, Ekwusigo Local Government Area of the state were being forced by the army to undertake medical care.
In a statement, a Facebook user, Ebuka Nnebe, alleged that some students in Anambra state fled their various schools when they were being forced to undertake the medical exercise without their prior knowledge.
But the governor of the state, Willie Obiano through the Secretary to the State Government (SSG), Prof. Solo Chukwulobelu, said the exercise was part of army social responsibility to members of the public.
The statement read: “The attention of the state government has been drawn to an ongoing medical outreach being undertaken by the army in Ozubulu, Ekwusigo Local Government Area. “The state has been made to understand that the exercise is part of Army social responsibility to members of the public.

“However, strong apprehension among the populace has followed the exercise leading to withdrawal of students from schools by parents, misconception of the actual motive behind the exercise by stakeholders, community leaders and a general reservation by the public for whom the outreach is intended.
“To this end and to ensure no further escalation of the situation, His Excellency, the Governor, Chief Willie Obiano has contacted the army authorities and advised for immediate stoppage of the medical outreach until wide sensitization is conducted to reassure people of its intentions and benefits. The exercise has therefore been put on hold.

“Parents and guardians are strongly advised to stop withdrawing their wards from schools as the situation has been handled. All schools within the State will remain open as there is no cause for alarm.
“Community leaders, Presidents General and all Stakeholders are hereby reassured of the commitment of the governor and the state government to the well-being of Ndi Anambra. “The state government also strongly condemns observed rhetorics on social media completely misrepresenting the situation with insinuations of spread of diseases and death of students in schools arising from the exercise.
“The state categorically refutes these rhetorics and confirms that there is no death of any student anywhere in the state. “Mischief makers are warned to desist from spreading falsehood. Anambra remains calm and peaceful.
Follow Us on Twitter!