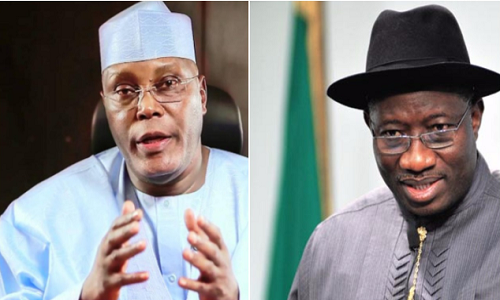 In Political Realignment, Atiku, Jonathan Meet over 2019 Presidency
May declare for PDP soon
The push to get former Vice President Atiku Abubakar to dump the All Progressives Congress (APC) and return to the Peoples Democratic Party (PDP) to enhance the opposition party’s bid to return to power in 2019 may have gained traction with a recent discrete meeting between him and former President Goodluck Jonathan.
The meeting said to have been held at the instance of Atiku, who was said to be seriously considering offers made to him by a section of the leadership of the opposition party to return, according to a THISDAY source, explored the desirability of the move and concluded that it would be a worthwhile political endeavour that could help terminate what both leading politicians regarded as the uninspiring rule of the APC.
NAIJASIMPLE had in a recent report indicated that there were concerted efforts by some PDP leaders to bring Atiku back to the party’s fold but that he gave conditions, including an assurance that he would be given its automatic ticket to contest the 2019 presidential election.
The fresh meeting with Jonathan was said to have looked into the possibility of this condition with both of them said to have agreed that all options should be kept open as the political dynamics of the country remained fluid, requiring a more pragmatic approach to the upsurge in politicking, which the Independent National Electoral Commission (INEC) warned against last week.
The electoral empire’s National Chairman, Prof. Mahmud Yakubu, had cautioned politicians against political campaigns for 2019, saying the ban on electioneering was yet to be lifted in accordance with Electoral Act 2010 as amended.
But Jonathan was said to have advised Atiku to consider returning to the PDP early enough to avoid being caught by certain provisions of the party’s constitution, which stipulate a period of time a member has to spend in the party before he could be eligible to contest for a political office.
“Atiku was advised to return early to enable him to fulfil the eligibility condition in the party’s constitution and also have ample time to integrate his political structure into the PDP’s,” a source privy to the meeting said.
The source said it was made clear to Atiku that he stood a better chance to realise his ambition in the PDP than the APC since President Muhammadu Buhari looked set to be given a right of first refusal by his party’s leadership.
According to the source: “He was told to note a recent comment by the APC National Chairman, Chief John Odigie-Oyegun, stating that as the incumbent, President Buhari had a right of first refusal even when the decision would have to be his.
“That has been buoyed by Kaduna State Governor Nasir el-Rufai who had practically launched Buhari’s re-election campaign.”
Referring to the reactions of the APC leadership and stalwarts to the recent declaration of support for his presidential ambition by the Minister of Women Affairs and Youth Development, Mrs Aisha Alhassan, the source said it was made clear to Atiku that there was nothing left for him in the APC and that he should just return to the PDP where he could reunite more easily with other founding fathers who were eager to rebuild the party.

NAIJASIMPLE had reported exclusively in a recent report that key leaders of the PDP were in talks with Atiku over his possible return to the party he co-founded in 1998. But the former vice president was said to have insisted on some conditions to be met before he could dump the APC for the PDP. This included an assurance that he would get the party’s presidential without a contest.
“The secret discussions are ongoing with a wing of the leadership of the PDP and this has encouraged the former vice-president to start consultations with critical leaders in the northern and southern parts of the country,” a source had told NAIJASIMPLE, adding: “However, Atiku has informed the PDP leaders who have approached him to guarantee him the nomination of the party for the presidential election before he can leave the APC, as he does not want to be messed up for the third time.”
Findings had shown that several governors in the PDP, especially Governor Ayodele Fayose of Ekiti State who had also declared his presidential intention, were willing to allow Atiku return to the PDP. Party sources had claimed that Fayose would not mind positioning for the vice presidency candidacy as Atiku was a strong politician who looked ready to take over power.
Multiple sources had told NAIJASIMPLE that the leadership of the PDP was comfortable with Atiku whom they believed was well liked by both northerners and southerners even as they downplayed the issue of his old age.
According to a source, the leaders believed emphasis should be placed on the state of his health rather than his age.
“We had the late President Umaru Yar’Adua who was in his mid-fifties but he had health issues which led to his demise midway into his presidency. Also, President Muhammadu Buhari had health issues which we warned against during electioneering in 2015, but it was dismissed as hate speech. “Then we have persons that are the same age or much older but are healthy and physically fit. So Nigerians should be more concerned about a person’s health than his age,” the source stated.
The source said the APC chieftain was aware of the issues surrounding his age and health and he is prepared to make his medical certificates for the last ten years public to allay any concern about his health.
Follow Us on Twitter!