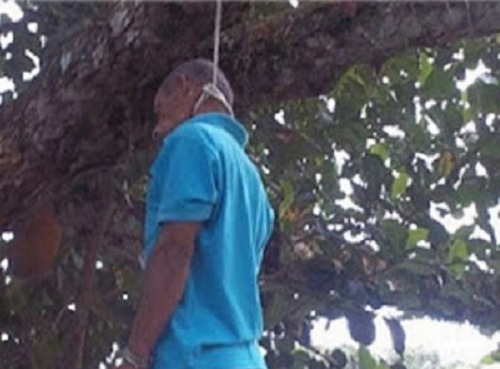 Edward Soje, a Director in the Kogi State Civil Service, has allegedly committed suicide by hanging himself on a tree in Lokoja, the state capital.
Soje’s body was discovered on a tree behind the mammy market at the Maigumeri barracks, in Lokoja.
The 54-year-old is said to have committed suicide 10 days after his wife of 17 years gave birth to a set of male triplets in a private hospital in Abuja.
The Grade Level 16 Officer in the Kogi State Teaching Service Commission, hails from Ogori town in Ogori -Magongo Local Government area of the state.
Soje, who is being owed 11 months’ salary arrears had before killing himself travelled to Abuja and left a suicide note for the wife who also works in one of the federal ministries.

The suicide note reads, “Psalm 121:3 God will not suffer your foot to be moved: He that keepeth you will not slumber. Amen. You and the three boys, the God Almighty will keep you and prosper you, amen. I love you.”
The incident was confirmed by the spokesperson of the State Police Command, ASP William Aya.


Aya told newsmen on Saturday that Soje’s body was discovered on a tree behind the barracks.
He said the Divisional Police Officer in charge of Area D Division received information about the incident from the military intelligence office in the barracks.
“Police moved to the scene, removed the corpse to the morgue of the Federal Medical Centre, Lokoja. Investigation is still ongoing,” Aya said.
Follow Us on Twitter!