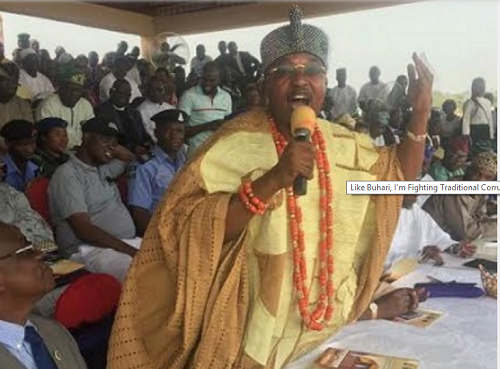 The Oluwo of Iwoland, Oba AbdulRasheed Adewale Akanbi, Teli I has said he is vehemently fighting some traditional corrupt practices just as President Muhammadu Buhari combating with official corruption in the nation.
The Osun Monarch in a telephone chat with News Punch reporter yesterday said the recent rising of ritual killings, kidnapping, and the uncivilized tradition of offering human sacrifices to gods is worrisome, hence, such barbaric culture and acts must stop.
"Killing for appeasement of god in whatever form is not just traditional corruption but a very grievous sin before Almighty Allah", Oba Adewale said.

“While President Muhammadu Buhari is fighting official corruption, I am fighting traditional corruption such as ritual killings, kidnappings and offering human being as sacrifice to gods”

"I still don’t understand in a 21st century an idol that cannot see, talk or do anything by itself, and they Killing Human being for, that our fur-father Odudwa never worship any Orisa”
"It is sadden seeing Nigerians killing a fellow being to gods, it is uncultured uncivilized and illogical. What kind of god is that? Human being are the god of deities
Oba AbdulRasheed, however, reiterated that as a monarch, he does not deputize any idol referred to as gods as most Yoruba kings are called Alase Ikeji Orisa, meaning, deputy to gods
"I am not Alase Ekeji Orisa, I am ALASE LORI ORISA People should address me like that henceforth”
Follow Us on Twitter!