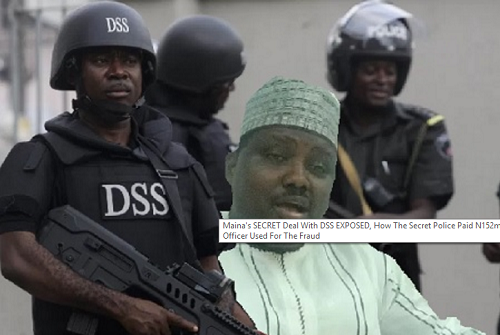 Nigeria’s secret police, the State Security Service (SSS), once made curious huge cash transfers into a bank account associated with a former chairman of the Presidential Task Force on Pension Reforms, Abdulrasheed Maina, PREMIUM TIMES can report.
The uncovering of the payments, investigators say, suggests Mr. Maina and the security agency had been in an unholy relationship for a while.
On Tuesday, PREMIUM TIMES exclusively reported how Mr. Maina received security protection from operatives of the Nigeria Police Force and the SSS who also allegedly provided a hideout for him.

Mr. Maina is on the run following moves by the Economic and Financial Crimes Commission to charge him to court for alleged N2 billion fraud.
As exclusively reported by this newspaper two years ago, Mr. Maina has a history of using bankers and other intermediaries to launder most of the money he allegedly embezzled from the pension funds.
Sometimes in 2011, while serving as chairman of the pension task force, Mr. Maina, using his banker sibling, Khalid Ali Biu, opened a corporate bank account in the name of Cluster Logistics Limited domiciled at Fidelity Bank.

Mr. Biu, who was a staff of the bank, was both the bank’s account officer as well as a director of the fictitious company, according to bank and company registration documents sighted by this newspaper.
Bank papers, including mandate card for the Cluster Logistics account also identified Mr. Maina as a signatory to the account.
Investigators said the account had over N500 million cash inflow that were mostly cash deposits made between 2011 and 2013.
Withdrawals from the accounts were also largely in cash. Some of the money, according to investigators, were also changed into dollars.
Curiously, however, among deposits into the accounts were three payments made over a period of one year by no other than the SSS, under its preferred name of Department of State Services (DSS).
Bank documents show that the security outfit paid a total of over N152 million.
The first tranche of over N61 million was paid on November 16, 2011 and the last made on November 14, 2012.
One of the deposits shows that it was made in the name of “DSS Pension Biometrics”.
It is unclear if Cluster Logistics offered any services to the SSS to warrant any payment.
The discovery of the account details, according to a source, “unsettled the SSS despite the EFCC’s effort at downplaying the matter in the spirit of inter-agency esprit de corp.
“Now that the whole case is being revisited it is important for the president to order forensic investigation into the SSS pension department,” he said.
Another EFCC official, who asked not to be named, said before the recent controversy over Mr. Maina’s matter, the commission was already preparing to arraign some of the bankers who aided the dismissed civil servant to allegedly launder billions.
PREMIUM TIMES could not reach SSS for comments on this story Wednesday night. The agency has no official spokesperson.
EFCC’s spokesperson, Wilson Uwujaren, did not respond to multiple telephone calls from this newspaper.
Follow Us on Twitter!