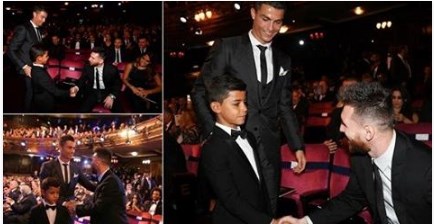 The Barcelona player was all smiles as he shook the hand of the seven-year-old boy before the start of the ceremony at the London Palladium before getting acquainted with Cristiano Ronaldo.
Cristiano Ronaldo won the world’s best player at the 2017 Best Fifa Football Awards in London. The 32-year-old Portuguese beat rivals; Barcelona’s Lionel Messi and Paris St-Germain’s Neymar to the honour.
The Portuguese international was a clear favourite after playing a massive part in Madrid’s win of the UEFA Champions League back to back.
He was also instrumental to Madrid winning the La Liga title last season.

The 32-year-old, who scored 44 goals for club and country in 2017, is the only player to have won this award given that it was introduced in January when the attacker won it for 2016.

The player who was accompanied to the London Palladium venue of the ceremony by his son and partner Georgina Rodriguez, thanked his club and fans for the support over the years.
“This is a great moment for me. Thank you to all my fans all over the world. I appreciate that. I’m so happy, thank you very much and have a good night,” he said after receiving the award.
He also acknowledged the presence of Messi and Neymar. I want to mention Leo (Messi) and Neymar to be here. Ronaldo’s boss Zinedine Zidane beat Chelsea manager Antonio Conte and Masimilano Alegri of Juventus to the FIFA Best Coach of the Year.
See FULL List of Winners Here.