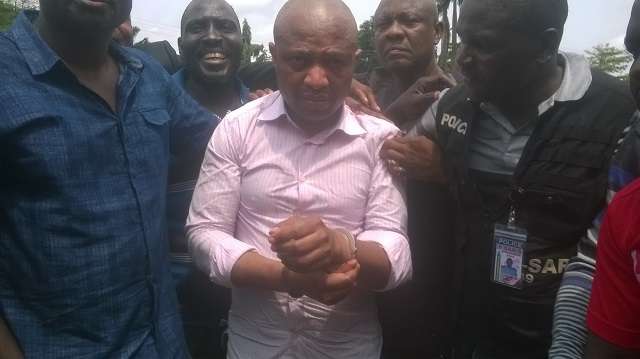 A Federal High Court in Lagos on Tuesday ordered the Police to produce in court, Okwuchukwu Obiechina, the brother-in-law of alleged kidnap kingpin, Chukwudumeme Onwuamadike, a.k.a Evans.
Justice Mohammed Idris, who gave the order, said Obiechina must be brought before him on Oct. 12.
The order followed a suit filed by Obiechina, urging the court to order his release from police custody.
His lawyer, Mr Olukoya Ogungbeje, said Obiechina had been “detained” by the police since June 2 in connection with the criminal charge brought against Evans.

Obiechina and his wife, Nzube, who are both plaintiffs, had sued the State Commissioner of Police, the Nigeria Police, and the Special Anti-Robbery Squad in the state.

On Tuesday, Ogungbeje had appeared before Justice Idris with an ex parte application, urging g the court to order the release of Obiechina.
However, Justice Idris did not grant the application, but directed the lawyer to put the police on notice with an order that it must produce Obiechina before him on Oct. 12 and also show cause why a release order should not be made.
In a 15-paragraph affidavit in support of the ex parte application, the counsel said Obiechina was arrested by a team of policemen,and that Obiechina’s arrest was due to his relationship with Evans.
He claimed that the accused has not committed any offence known to law to warrant their being arrested and detained.