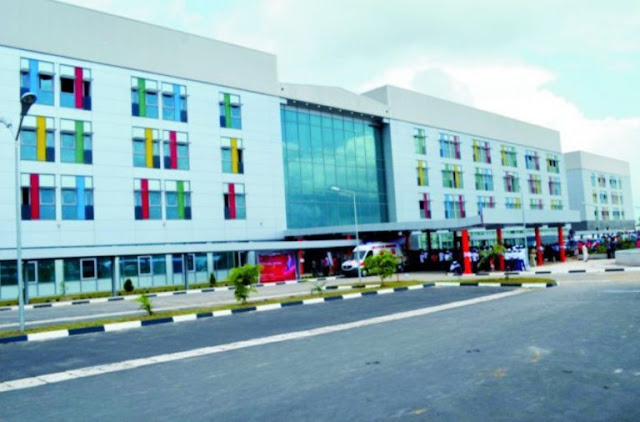 The Ibom Specialist Hospital in Uyo, Akwa Ibom State, has been shut down, just two years after it was built and commissioned by the administration of former governor Godswill Akpabio.
Almost all the health workers in the hospital were foreigners, mostly from India.
Mr. Akpabio had boasted that the hospital, which he described as ‘world class’, was better equipped and higher in status than university teaching hospitals in Nigeria, and that it was going to promote medical tourism in the country.
The multi-million dollar hospital was shut down in September after its private managers terminated their contract with the state government and withdrew from the facility.
When PREMIUM TIMES visited the hospital on Monday evening, the facility was locked down; apart from the security officials, not a single person was inside its massive buildings.
Visitors were not allowed entry.
Some persons who had worked in the hospital told PREMIUM TIMES that the private managers – Cardiocare Medical Services Ltd – left because of unresolved issues bordering on funding by the state government.
The Commissioner for Health in the state, Dominic Ukpong, confirmed on Wednesday to this newspaper that the hospital has been closed down.
Mr. Ukpong, a medical doctor, admitted that there was a disagreement between the state government and Cardiocare Ltd over the funding of the Ibom Specialist Hospital. But he also accused Cardiocare of poor management of the facility.
“The administration of the hospital, in my opinion, has not been satisfactory,” Mr. Ukpong told PREMIUM TIMES.
“Their excuses have been that government didn’t meet its own part of the obligation. But I am a witness to the huge amount of money the government has given to the service provider to run the hospital. And we haven’t had much to show for it,” the health commissioner said.
He said money was released at various times for the running of the hospital, besides the $5 million start-off fund the state government gave to Cardiocare Ltd.
The hospital could not get its electric power from the power company since it was not connected to the national grid.
Mr. Ukpong said: “Apart from the fact that the state government was giving diesel free to their quarters, I remember that at some point the state government gave N250 million to them (Cardiocare), at their request, which they said they wanted to use to pay salaries.
“As soon as they were given the money they came and said that that was for arrears. They came back for more money.
“The state government has given them N50 million, also on request.
“They asked that the government should be paying them N30 million monthly for them to pay salaries to some consultants, especially the neurosurgeon. We gave them the money.”
Mr. Ukpong said that the former governor, Mr. Akpabio, who is the Senate Minority Leader, intervened around June and mediated in a meeting between the state government and Cardiocare.
Cardiocare, Mr. Ukpong said, did not honour any of the agreement reached at the meeting, among which was that the company should present to the state government a price-list of the services the hospital was rendering.
“You know people were complaining about the high cost of getting medical services there, and we wanted to make sure that our people had access to the medical care offered in the facility,” he said.
Mr. Ukpong said Cardiocare had insisted that they were scaling down the hospital operation because of lack of funds, but that the company refused to present a proposal for it to the government as agreed in the meeting.
The commissioner said the government released N180 million to Cardiocare after the meeting that was mediated by Mr. Akpabio.
“As soon as they collected the money they left,” Mr. Ukpong said.
A medical doctor who used to work in the hospital told PREMIUM TIMES that it struggled for survival because it did not enjoy much patronage from people within and outside Akwa Ibom.
The doctor, who did not want his name mentioned in this report, said Governor Udom Emmanuel and his administration did not care much about how the hospital was faring, adding that the governor never visited or promoted the hospital in order to encourage local patronage.
The doctor said that what may have eventually brought down the hospital was the “huge” resources it spent on the treatment of the victims of the December 2016 Uyo Church building collapse.
“Our hospital was where they brought almost everybody to; even people that were taken to other hospitals still came back to our hospital for treatment,” he said.
“We had up to 80 surgeries or more. We had over a hundred patients at that time.”
He said the state government did not pay for the treatment of the patients until things became really bad for the hospital.
“The governor released money in July, but by that time things were already bad, the surgeons that were making money for the hospital left,” he said.

The health commissioner, Mr. Ukpong, responded to the allegation, saying that the N180 million the state government gave to Cardiocare Ltd was partly meant for the treatment of the victims of the Reigners’ Bible Church collapse.
“They gave me an outrageous bill which I couldn’t agree with as a doctor,” he said.
“They were asking for N294 million for 300 out-patients and about 70-something in-patients.
“The hospital was complaining about money before the church incident. So, let nobody use that incident as an excuse,” he said.
Media reports put the amount at which the Akpabio administration used in setting up the hospital at N30 billion. But the health commissioner, Mr. Ukpong, said it was about N41 billion.
The hospital, which was one of the signature projects of the Akpabio administration, was hurriedly inaugurated in May 2015, few days to the end of the administration, even when the buildings were yet to be completed.
Governor Emmanuel said in June that the hospital was not well-equipped to produce optimum results, an assertion that has been re-echoed by the health commissioner.
“The whole thing wasn’t totally completed. The dialysis section didn’t come through. Three modular theatres were not yet completed. Some of the areas were not completed because the contractors did not have all their money,” said Mr. Ukpong, who revealed that the hospital was running at only 10 per cent of its total capacity.
The commissioner said the agreement between the state government and Cardiocare Ltd was done clearly in favour of the latter, adding that his office, for instance, didn’t have any supervisory role in the entire arrangement.
Also, he said he was not aware that the hospital managers ever paid any money to the state government, despite the agreement stipulating that they would be paying some revenues to the government.
Some patients who had paid medical fees to the hospital before it was shut down, unfortunately, became stranded when they were later prevented from entering the facility.
Inih Ebong, a former lecturer in the University of Uyo, Akwa Ibom State, was among the patients that were stuck after paying money to the hospital for a check-up.
Mr. Ebong had paid N30,000 for an abdominal scan – Barium enema – recommended by the University of Uyo Teaching Hospital, UUTH, which referred him to the hospital.
The health workers at the Ibom Specialist Hospital, on three different days, kept asking Mr. Ebong to come back for a scan even when they must have known that the hospital was about being shut down. They told him at some point that they could not conduct the scan because of equipment breakdown.
Mr. Ebong till date has not been able to do the scan or get a refund from the hospital.
“And this was a scan that required you to stay without eating any food for at least two days before it,” Mr. Ebong said.
“In addition to that, they had prescribed a laxative for me to take, two tablets in the morning and another two in the evening. Then on the third day, the day for the scan proper, I was told to have an enema to clear whatever food particle may have remained in my digestive system,” he said, adding that he took a total of 24 tablets of the laxative and got fed up with it.
Mr. Ebong said he repeated the process of emptying his bowel thrice in less than one month, on the doctor’s advice, while waiting for the hospital to call him in for the scan.
When he telephoned the hospital on September 21, instead of being told to come in for a scan, he was informed that the facility had been shut down, Mr. Ebong told PREMIUM TIMES.
“The radiologist that picked up my call told me that there was no point coming to the hospital as the security guard won’t let me into the hospital premises,” he said.
The health commissioner, Mr. Ukpong, said for now nobody could say when the hospital would re-open.
The state government, he said, was talking with investors from Dubai and Canada.
Apart from this, the commissioner said the government was doing its best to maintain the hi-tech equipment in the hospital.
“I feel upset that it has come to this, but I also feel relieved that a poor administration has left,” Mr. Ukpong said.
PREMIUM TIMES could not reach Cardiocare Medical Services Ltd for its reaction.
Follow Us on Twitter!