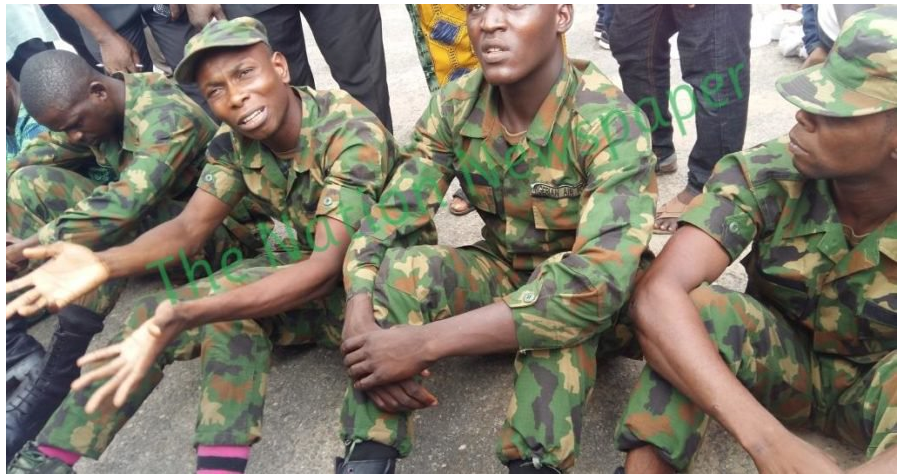 Four new recruits of the Nigerian Air Force (NAF) and seven others including an employee of the Lagos State Water Corporation were paraded on Monday by the police in Lagos after their arrested for vandalising iron pipes worth about N25million.
According to a report by The Nation, Air Crew Men (ACM) Akingbola Wole, Ugbong Abel, Alalifu George and Kumish Revelation attached to 055 NAF Camp, Victoria Island, were contracted by the Water Board’s employee, Olayiwole Oyedele to provide security during the vandalism on Saturday morning.
The buyers, Okechukwu Alozie, Wale Lawal, Babatunde Samson, Ismaila Adejare, Iliasu Ibrahim and Ikechukwu Ezemba, were also apprehended by security operatives.
Oyedele allegedly sold the irons to Alozie for N650,000 and had already collected N200,000 upfront. According to Oyedele, he agreed to pay the soldiers N35,000 for their service, adding that Wole collected N20,000 as advance payment.
The other soldiers lamented that they knew nothing about the deal, insisting that they were only out to help a ‘relative’ of their course mate who was supposed to be a wedding.

The acting Police Commissioner, Imohimi Edgal said they were arrested around 11:42am on Saturday, following a tip off.
According to the police, the Air Force personnel would be handed over to their Commanding Officer while the other suspects would be charged to court.”
Follow Us on Twitter!