Home » news » Nnamdi Kanu Is a Common Criminal Who Has No Job, His Followers Have Entered '"One Chance" - Army

Nnamdi Kanu Is a Common Criminal Who Has No Job, His Followers Have Entered '"One Chance" - Army 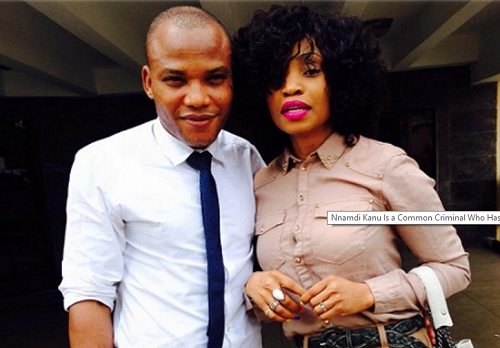 Nnamdi Kanu, the leader of the Indigenous People of Biafra has been described by the Nigerian Army as a common criminal who has no means of livelihood but depends “propaganda” to make people believe him.
Brig. Gen. Sani Usman, the Director, Army Public Relations stated this in Abuja while rounding off a two-day media conference on the military’s enhancement of human rights, Punch Newspaper reported
The army spokesman, According to Punch Newspaper, who stressed the need for a robust army-media relationship towards enhancing national security, said those people following the IPOB leader were in a “one-chance vehicle.”
Usman said, “There was an allegation that somebody (Kanu) went into hiding. Now, I can’t remember the day but in an interview on Channels TV, one of Nnamdi Kanu’s younger brothers said that he was in hiding and he knew where he was.

“And one lawyer came up that he has taken the Chief of Army Staff to court. Now, who gave you the brief? You said you do not know where he (Kanu) is. Now, who gave you the brief? And the media is asking us where is Nnamdi Kanu? Why not ask the man that said so who gave him the brief to take people to court when he does not know where the man is?
“…That is why those people following him have entered into a one-chance vehicle. This is somebody standing trial in a criminal case. Sometimes, whether we like it or not, we want to stand against the truth. But no matter how long, the truth will come to pass on October 17. This is an individual without a means of livelihood.
“I can speak eloquently. So what? If I can speak like him; I can also have my own group, that’s exactly what is happening. So, what is the essence of our education as a people? You know that somebody is in a criminal case, and you believe in him.”
Follow Us on Twitter!