NNPC $25bn Saga: The Top Secrets, Many Sins of Kachikwu, Why Baru On Revenge Mission ...What Buhari Told Yesterday REVEALED 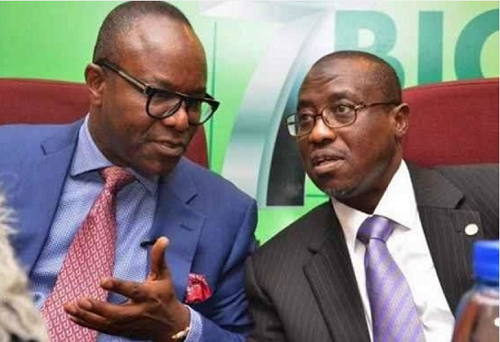 The feud between the Minister of state for Petroleum Resources, Dr. Ibe Kachikwu and Group Managing Director, Nigerian National Petroleum Corporation (NNPC), Mr. Maikanti Baru, has polarised the corporation along ethnic lines, Investigation by Saturday Telegraph has revealed. Although President Muhammadu Buhari has ordered the two feuding “oil men” to resolve their differences away from the “public eyes,” our correspondent gathered that the North/South supremacy battle at the corporation has degenerated as a result of the supremacy battle between the minister and the GMD.
“The gulf between our colleagues (staff of NNPC) from the North and our colleagues from the South kept widening immediately the news of Kachikwu’s letter in which he alleged in-surbordination and violation of due process by the GMD became a public knowledge at the (NNPC) towers,” a senior employee of the NNPC told Saturday Telegraph after his anonymity was guaranteed.

Pointing out that he “sympathised with all staff who aligned with any camp based on ethnicity because of Kachikwu and Baru,” our source who is a manager at the NNPC added that the real problem between the duo was “war of ego” that has been age-long between even past ministers of petroleum resources and GMDs. Kachikwu’s letter, dated August 30, 2017, sent to President Muhammadu Buhari, also dug out a fresh oil contracts worth $25 billion which has rocked the corporation.
The minister of state, who apparently could not bear what he called Baru’s “insurbodination and lack of adherence to due process,” accused the GMD of running a one man show at the corporation.
He stated that he had been one year of tolerating these disrespectful and humiliating conducts by the GMD and decided to bring these to your attention Buhari is the direct over-seer of the Ministry of Petroleum Resources with his deliberate action of not appointing a substantive minister for the ministry. The cold war between the two President’s men heightened fear of ethnic profiling at the corporation.
Giving credence to this, Kachikwu declared that he had been labelled before the President as being anti-North and pro-Niger Delta militants. Aides to both Kachikwu and Baru have created and nurtured rival factions in the oil industry, while the two feuding oil men have also cultivated habits of dishing out conflicting figures on production cost at public functions, a move that is threatening to further derail the reforms in the NNPC, this newspaper gathered.
“In order to convince your Excellency to sideline me, I am sure I have been labelled as being antinorth, corrupt and in collusion with militants,” Kachikwu said, adding that he had been subjected to “one year of tolerating these disrespectful and humiliating conducts by the GMD.” Problem started when Kachikwu, a lawyer who was considered “an outsider” from ExxonMobil upon his appointment as the GMD, NNPC, “humiliated” Baru, who was the most senior Group Executive Director (GED) in charge of Exploration and Production at NNPC when Kachikwu took over two years ago.

“Instead of Baru, Mr. President, however, chose to appoint Kachikwu, a lawyer and private sector person from ExxonMobil and Kachikwu was later given a dual role of not only the Minster of State (MOS) and Chairman of the NNPC board but also made NNPC GMD, giving him unfettered powers.
“Now the first thing Kachikwu did was to post Baru the most senior GED away from the NNPC to the Ministry as Technical Adviser Gas, a more or less redundant position. For the whole year Baru was there he had no office.
“The joke was that Kachikwu’s people would see him loitering around the ministry and say “Oga wetin be dat your name again? Minister say make we find you office,” a public commentator, Ogunyomi Sangogbamila, added. Stating that Baru had, in his capacity as the most senior member of staff then at the NNPC, earlier recommended the on-going reforms to the President, he said: “On the reforms Baru initiated in the NNPC Kachikwu added two principal things: he renamed the Group Executive Directors (GEDs) as Chief Operating Officers (COOs) and changed the reporting structure of the Group General Manger (GGM) NAPIMS and GGM Nigeria Petroleum Development Company (NPDC) who historically reported to the GED Exploration and Production who then reported to the GMD to report directly to him (Kachikwu) as the GMD.
“Baru reverted the NAPIMS and NPDC structure to status quo because it delayed their work having to report to GMD (whose desk was already full) and he re-Christened the GEDs as GED/COO when he came back as GMD. “While Baru was in the wilderness, Kachikwu loomed large. He appointed new GEDs now COOs and bestrode the industry. But rumours started to fly about “business”. “His brother who was a known wheeler dealer in Abuja became the go to guy and began to call shots.
Nothing is hidden under the sun and when information began to filter to the Villa even though perhaps not with enough proof the FG now felt it was unwise to create another “superman” like Dieziani who controlled everything in the industry, they chose to revert to status quo and divide both positions.
“The minister is the bigger post theoretically and Kachikwu got that. The GMD reports to the minister but in reality that is where the “pot of soup” is. Any minister needs to be in a good relationship with his GMD otherwise he will be “empty” if you know what I mean. Well as fate will have it, it was the same Baru who was treated with disdain by Kachikwu that now got the GMD position by virtue of his seniority. “The truth is that Baru and Kachikwu are barely on speaking terms. If Kachikwu needs anything from NNPC he goes through a top shot at one of NNPC’s subsidiaries who was his (Kachikwu’s) appointee but that is a function of the personal relationship between both parties and the history of how he was treated.
The top shot himself needs to be careful so as not to offend the GMD his immediate boss while seeking to please the minister. The real struggle is about resources, it is always like this. “Both have been firing memos to the Presidency reporting each other from day one. This I understand has culminated in the decision that they would both go.”
Source: New Telegraph