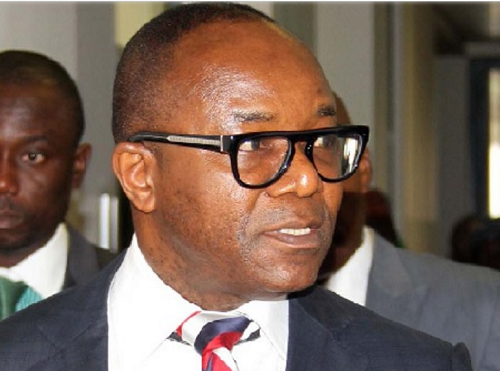 Minister of State for Petroleum Resources, Dr. Ibe Kachikwu, has revealed the reason why he decided to write a letter to President Muhammadu Buhari to complain about the activities of the Group Managing Director of the Nigerian National Petroleum Corporation (NNPC), Dr. Maikanti Baru.
Many Nigerians have been blaming the minister for escalating the crisis of confidence between him and Baru with his letter to Buhari which was leaked to the public through the social media on Tuesday.
Kachikwu critics said he should have made efforts to discuss the matters with Buhari one on one one before writing a letter, knowing that such means is prone to leakage.
But Kachikwu’s critics perhaps have not been able to read a copy of his letter to the president where he stated explicitly that he made concerted efforts to see the president since he returned from the UK from medical vacation but to no avail.
In his letter to Buhari, Kachikwu stated that he tried to have a one-on-one appointment with the president at the State House but was blocked. “I have been unable to secure an appointment to see you despite very many attempts” Kachikwu told Buhari in his disturbing letter.
Kachikwu’s supporters are wondering why he should be blocked from seeing the his principal who appointed him to the post. They said there is more to the whole crisis and that everything would soon be revealed. They described the letter as well-intentioned.
In the letter dated August 30, 2017, Kachikwu complained bitterly about the recent massive changes at NNPC as the changes were never discussed with him and members of the board of the corporation.
“Indeed, in anticipation of vacancies that would arise from retiring senior executives of NNPC, I wrote the GMD (Baru) a letter requesting that we both have prior review of the proposed appointments. This was to enable me to present same to the board or give an anticipatory approval and then review with the board later.
“I wrote to the GMD, given previous happenstance of this nature. In addition, thereafter, I called the GMD to a private meeting where I discussed these issues. Needless to say that, not only did he not give my letter the courtesy of a reply, he proceeded to announce the appointments without consultation or board concurrence,” Kachikwu said.
Kachikwu added that Baru did not also consult the Board Services Committee, whose function it is to review potential appointments and terminations of senior staff prior to implementation.
The minister also alleged that Baru had sidelined the NNPC Board in the awards of contracts.
According to the minister, the legal requirement is that all contracts above $20 million should be reviewed and approved by the NNPC board.
He told the president that in over one year of Baru’s tenure as the boss of NNPC, no contract has been run through the NNPC board.
“This is despite my diplomatic encouragement of Dr. Baru to do so to avoid wrongfully painting you as a president who does not allow due process to thrive in NNPC. Given the history of malpractices and the public perception of NNPC as having a history of non-transparency, the NNPC Tenders Board (NTB) cannot be the final clearance authority for contracts it enters into.
“The NTB, which is a collection of top-level NNPC executives and COOs, with the GMD as chairman, cannot continue to be the final approval authority for multi-million dollar contracts and transactions involving NNPC to the exclusion of the board.
“Board members have singularly and collectively raised these issues to no avail,” Kachikwu explained.
The minister listed major contracts awarded by Baru without the input of NNPC board to include $10 billion crude term contracts; $5 billion direct sales direct purchase (DSDP) contracts; $3 billion AKK pipeline contract; financing allocation funding contracts worth $3 billion; and NPDC production service contracts valued at $3-$4 billion.
“There are much more Your Excellency. In most of these activities, the explanation of the GMD is that you are the Minister of Petroleum and your approvals were obtained.
“However, the correct governance is that the Minister of State and the board review the transaction and give their concurrence prior to presentation to you.
“As in many cases of things that happen in NNPC these days, I learn of transactions only through publications in the media. The question is why is it that other parastatals which I supervise as Minister of State or chair their boards are able to go through these contractual and mandatory governance processes and yet NNPC is exempt from these?
“I know that this bravado management style runs contrary to the cleansing operations you engaged me to carry out at the inception of your administration. This is also not in consonance with your renowned standards of integrity,” Kachikwu said.
Kachikwu informed Buhari that even though the appointments of other heads of parastatals in the Ministry of Petroleum were made without his input, he has maintained a cordial and respectful relationship with all of them.
According to him, the heads of the other parastatals have continued to excel in their areas and adhere to mandatory governance processes.
He revealed that his working relationship with Baru has been “fraught with humiliation, sidelining, and campaigns of character defamation against me”.
“This is particularly frustrating given the many contributions I have made to the growth and stability of the Nigerian oil and gas industry through the many policies I have introduced since August 2015.

“If NNPC is considered and known to be one of the parastatals under the ministry, why does the GMD refuse to report to my office or to the board on serious issues such as above, especially given that I have been by Your Grace, the minister with oversight responsibilities over these parastatals for two years?” Kachikwu queried.
The minister further alleged that when he called for meetings, Baru would send his subordinates without the courtesy of a call to explain his absence.
He said he had managed the bad perception created by Baru’s blatant insubordination and disrespectful attitude and had also worked hard to avoid being seen as petty and meddlesome.
The minister alleged that Baru has created a fear culture in NNPC, against the open administration he had introduced with the president’s support in their first year of pushing reforms.
“NNPC staff are afraid of contacting me to avoid being punished, sidelined in appointments and targeted. Indeed, the key factor for growth and advancement in NNPC of today is to avoid the Minister of State’s Office,” Kachikwu added.
On the allegation being circulated by faceless blogs that he is anti-north, Kachikwu said all his appointments were generated with key inputs from all the COOs of NNPC and were balanced and based strictly on skills, experience, drive and ethnic balancing for senior management positions.
He stated that he is a detribalised Nigerian who grew up in Kano and had worked in various parts of the country.
According to him, he has no reason to be anti-north, as he has also found in his working career that good and skillful people abound everywhere in Nigeria.
He also denied the allegation of corruption being circulated by some blogs, stressing that all contracts awarded under his watch were based on merit, adding that he rarely participated in those contractual processes except to review them.
“Anyone peddling any contrary information is resorting to cheap blackmail,” he said.
Reacting to the allegation that he was in collusion with Niger Delta militants, Kachikwu reminded Buhari that the blueprint of all his engagements with the militants was discussed and approved by him (the president).
According to him, all the engagements with the militants was done in collaboration with the Office of the Vice-President, DSS and NSA, adding that he took the issue of security headlong because it was the primary causative factor for oil production that declined from 2.2 million barrels per day to 1 million barrels per day in November 2016.
“I took on the issue of security headlong because it was the primary causative factor for production that declined from 2.2 mbpd to 1 mbpd at our lowest point (November 2016). At great risk to my life, I visited militant camps, coordinated with our security apparatus, organised the tour of the HEVP (His Excellency the Vice-President) to several frontline states and worked with PANDEF and other groups to bring calm and increase production and some measure of stability to what it is today.
“I have never betrayed the trust that you placed on me. I did not deploy any public financial resources to achieve the results of the Niger Delta region. Most times I have utilised my own personal resources and goodwill accumulated over the many years prior to my appointment to achieve these far-reaching results and of course, all these were coordinated with agencies of government (Office of the VP, DSS, NSA, etc).
“I dare mention that the blueprint of these engagements was discussed with and approved by you.
“Given the sensitivity of my position, I remain one of the most tracked officers of your government, so if there is any truth to these rumours, you would have known,” Kachikwu added.
The minister also urged the president to save the NNPC and the country’s oil and gas industry from collapse arising from non-transparent practices and empower the NNPC board to do the needful.
He pleaded with Buhari to save him from the humiliation and disrespect by compelling NNPC to submit to oversight regulatory mandate and supervision, which he is supposed to manage on behalf of the president.
Kachikwu also wants the president to order the suspension of the recent appointments and promotions in NNPC until he and the NNPC board have made their inputs, noting that this would send a clear signal of process and transparency.
He also asked the president to encourage joint presentation meetings by the heads of parastatals and himself to Buhari in order to foster a culture of working together and implant discipline in the hierarchy.
Follow Us on Twitter!