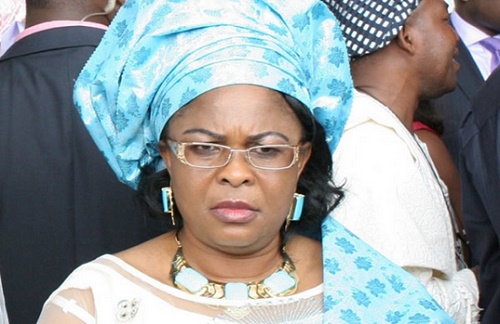 Wife of former President Goodluck Jonathan, Patience, has dragged the Economic and Financial Crimes Commission, EFCC, before the Federal High Court in Abuja, demanding N2billion as general damages/compensation for the violation of her fundamental rights.
Patience is praying the court to declare that incessant harassment she has suffered in the hands of the EFCC, through negative media publications, denigrating and degrading her person as corrupt, without any invitation by the anti-graft agency, trial or conviction by a court of competent jurisdiction, amounted to gross violation of her rights under Section 37 of the 1999 Constitution.
She also wants, “A declaration that indiscriminate freezing of her bank accounts and those of her relatives by the EFCC under the guise of investigation of proceeds of crime, without any invitation or interrogation by the respondent is a violation of her rights to own property and to fair hearing guaranteed under Sections 44 and 36(1) of the 1999 Constitution.
“A declaration that the invasion, breaking into and ransacking of the applicant’s family property by the agents of the respondent in the absence of the applicant or any member of her family, while purporting to be executing a search warrant is a violation of the applicant’s fundamental human rights to private and family life guaranteed under the provisions of Section 37 of the Constitution of the Federal Republic of Nigeria 1999 (as amended).
“A declaration that the incessant harassment of the applicant by the respondent on the ground of her political views expressed by reason of her being a member of the opposition party in Nigeria, is a violation of the applicant’s fundamental human right to freedom from discrimination, guaranteed under Section 42 of the Constitution of the Federal Republic of Nigeria 1999 (as amended)”.

“An order of court restraining the respondent, whether by itself, its agents, privies or any person acting on its behalf from further violating the applicant’s fundamental rights adumbrated above”.
The suit marked FHC/ABJ/CS/586/2017, was supported by a 21-paragraph affidavit dated June 30 and deposed to by one Sammie Somiari.
The affidavit disclosed that the applicant had on January 4, 2017, directed her lawyers to file a rights enforcement suit at the Federal High Court Port-Harcourt, marked FHC/PH/FHR/17/2017 against the EFCC.
Mrs. Jonathan told the court that while parties had joined issues in the suit, the EFCC continued to violate her fundamental rights by invading and sealing up some of her properties in Abuja, including a property belonging to her Non-Governmental Organisation.
She said that based on continuous violation of her rights, especially with respect to the properties in Abuja, she instructed her lawyers to withdraw suit no FHC/PH/FHR/17/2017, pending in Port-Harcourt and file the instant suit.
Mrs Jonathan told the court that before her husband joined politics sometime in 1998, she had a private business she was managing.
She said that between 1999 and 2015, while her husband climbed the political ladder from being the Deputy Governor of Bayelsa State till he became the President of Nigeria, she continued to run her private businesses even though she was at various times the first lady of Bayelsa State and that of Nigeria.
She said that when her husband was in office as the President, between 2012 and 2013, she had some health challenges that necessitated her going abroad for treatment and later surgeries.
“Because of the challenges of having to travel with substantial cash for her medical treatment and the need not to contravene the Nigerian Law or any other law on money laundering, she sought for opinion of the then Acting Chairman of the EFCC, Mr Ibrahim Lamorde, who advised her to obtain credit cards from her banks.
“It was based on the advice of Lamorde, that Mrs Jonathan invited her banks and informed them of her desire to obtain credit cards.
“That on the 22nd of March, 2013, she opened 5 different accounts in Skye Bank Plc and credit cards were issued in respect of the said accounts.
“On one of her medical trips abroad, her Debit Visa Card with Skye Bank Plc stopped functioning as she could not pay her medical bills with the said card.
“Upon her return to Nigeria, she made enquiries through Skye Bank as to what happened to her Debit Card.
“That her enquiries revealed that it was the Respondent (the EFCC) that placed a No Debit Order on the said account and four others”.
She said the Commission later told her lawyers that the accounts were subject of money laundering investigations.
The applicant told the court that EFCC, in its determined bid to “make life unbearable for her”, applied and secured an order from Justice Binta Nyako of the high court, freezing not only her accounts, but also the ones belonging to her late mother, Mama Sisi Charity Oba.
“The Respondent has demonstrated a pathological dislike for the Applicant as the activities of the operatives of the Respondent overlook the fact that the Applicant was never a political office holder.
“The investigation into the operations of her pet project, NGO when she was first lady is an unprecedented act of animorsity against her as none of her project was funded by the government at any level”, the affidavit further read.
She maintained that unless it is restrained by the court, EFCC would continue to harrass her, adding that the agency waged a psychological war on her by its incessant threats of arrest of her relations, such as Mrs. Esther Oba, Tamunotonye Oba and her elder brother, Mr. Aseminaso Nyengierefaka
Follow Us on Twitter!