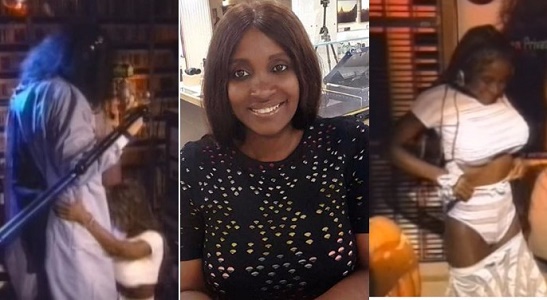 According to an angry reader named Emeka John Onyema who sent this in Afikpo Chicken, Maria Ude Nwachi aka Madam Whacky Se.x Ring.
A prost!tute is a prost!tute and must always behave like one, no matter how good she is and a cocotte will always dance surugede at any given point.
Afikpo Chicken or whatever she is called is a cocotte, call girl, hooker, harlot, cunt and irresponsible idiot. She was dubbed Madam Whacky S.ex Ring because of her famous monkey style position. She is know as .. Maria Uzor Egwu, Arianna Uzor Egwu, Maria Ude Nwachi, Nwanyi Afikpo, Afikpo Chicken. Only one person with different names, I wonder the kind of s.ex position that produces this ugly scammer and it goes a long way to prove that evolution can go in reverse. What a bad day for Igbo land, what a bad day for gullible Igbo’s following this Oji Ikpu eche OJi .
To tell you that ashawo is ashawo, she operate a secret sugar daddy club known as Rosie yug. She prey and recruit young beautiful igbo girls in Igboist and other igbo groups and give them to politicians and dirty old men in exchange for money. She collected N5.5 Million Naira from Okoroawusa, shared the sum of N500.000 and pocketed N5 Million Naira. She forged fake hundreds facebook accounts and use her fake facebook accounts to pocket N5million naira. That has been her style from day one, meanwhile okoroawusa is owing imo people more than 24 months salary in arrears and the pensioners are nothing to write home about.
She collected the sum of N22 million naira from Uche Sampson Ogah, pocketed N20 million with hundreds of fake facebook accounts and shared the sum of N2million naira to those working for her. She collected the sum of N8million naira from Patrick Uba and pocketed all the money using hundreds of fake facebook accounts.
She collected the sum of N4 million naira from Orji Uzor Kalu, diverted the sum of N3.5 million naira to her hundreds of fake facebook accounts and shared the rest to the people working for her and members of the public.
All the money collected un-behalf of public was diverted into her personal account and some of her staff/partner in crime named Henry, Ad and many left her to form their own Igbo group. I don’t want to mention their full names for security reasons.
She duped Igboville group and was among those that benefited from public money (N5 million) donated by notorious T A Orji during Igboville Conference at Aba.
She tried scamming Emeka John Onyema last three years and failed woefully, then send her attack dogs to blackmail Emeka John Onyema, all to no avail. It’s a pity that a former jailed harlot , a PORN STAR is now a Nigerian law maker and planning to go to senate. She is so ugly inside that if she is twice smart she is still be a useless prost!tute and I don’t blame her for deceiving gullible Igbo ‘s .
This lady don’t have brain cell and I can see that she is everything wrong with a human and Igbo land, she is a typical animal abuse, abusing everything about Igbo.
She claimed to love Igbo, but the reverse is the case, so she is cash and carry, very dirty and smelly idiot that haven’t got time to wash her pants and undies. Her face alone looks like something caught on fire and someone try to put it out with a hammer and I can’t remember the last time I saw something looking awkward and horrible like this lady, a constantly expanding thief, scammer and horrible criminal and disguised as a saint. Those that voted this cheap prost!tute has made a mistake of their lives. What a world.
What baffles me most is covering her ears all the time with wigs, have anyone try to find out the secret behind this evil PORN STAR and wigs?
She was rumoured to have fucked dogs and other animals during her days in the game and this led to her deportation from United States of America. New York Times called her local bush prost!tute , New York post called her madam Whacky s.ex ring master, daily news called her hooker s.ex master and all Africa news called her madam cunt the s.ex maniac.
Read The New York Times Article On Her

An Upper East Side woman, who gave new meaning to the phrase “time is money,” was freed from jail yesterday after admitting she ran a $4,000-an- hour cyber-hooker ring.
Maria “Arianna” Uzo Egwu, 30 – a recording artist, public-access TV host, and member of Howard Stern’s “Whack Pack” – had been in jail since mid-February after Manhattan prosecutors busted her upscale online escort service, Glamour Roses.
The service Web site earned $2 million a year and boasted a stable of “exquisite” call girls – including “models who have appeared in major motion pictures” – who were available to meet clients at several ritzy East Side apartments for $1,000 an hour and up.
Egwu’s site exaggerated the hookers’ credentials, prosecutors said. Only eight women were employed there, and none was a well-known model or star. Still, clients paid dearly – up to $32,000 for an entire weekend.
Egwu, a native of Nigeria, had originally faced up to seven years in prison for allegedly promoting prost!tution. That charge was dropped in return for yesterday’s guilty plea, which allowed her to immediately leave the Rikers Island cell she’s been held in for four months.
In her plea, Egwu admitted to using credit cards to launder the small fortune she earned with the lucrative business. Cops had found $212,000 in cash in her apartment at 84th Street and Third Avenue, where she ran the business. She also had a $68,000 limo bearing the license plate “DECADENT.” Another $417,000 was seized from her bank account.
Egwu loses the money as part of the plea deal. Her sister, Mnenne Egwu-Igwe, 42, of Central Islip, also pleaded guilty yesterday, admitting she received money from Egwu – and knew full well where it came from. The sister was also spared a jail term.
Egwu became a regular on Stern’s show, nicknamed “Uzo Candybabe,” after turning up at one of his book-signing parties in a mink coat and a bikini. Her public access show, “Dance Ventures with Uzo,” earned her a small cult following.
“She really suffered greatly in jail, and plans now to use her brains and talent to better serve people,” said her lawyer, Mark Pollard.
Egwu is much more than a madam, said her producer, Michael Flume. Flume heads 6 AM Records, which last year recorded her first album, “2000 Elephants.”
“She’s done things like funding a school in Nigeria,” Flume said. “These are things that never come out. People only hear about the bad things.”
Watch below video
Video Player
Follow Us on Twitter!