Shut Up! Else We'll Expose Your Atrocities - VoN DG Threatens Jonathan Over Attack On Buhari 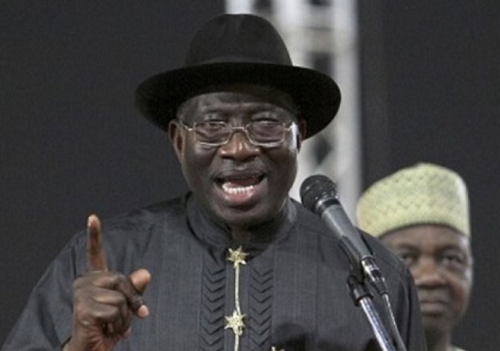 Director General of the Voice of Nigeria and a chieftain of the All Progressives Congress (APC), Ostia Okechukwu has asked former President Goodluck Jonathan to quietly retire to any part of the country of his choice and stop challenging the APC and the Buhari government to a public debate, threatening to open the pandora box on the former president.
Okechukwu told The Nation in a telephone interview that the former President cannot challenge the current government to any public debate because his government failed the nation, leaving major infrastructure to decay, while public funds were freely diverted.
He challenges the former President to show the nation any project that he was able to complete during his six-year in office as President, adding that even the development he did at the nation’s airport was not commensurate with the money voted for such projects.
Okechukwu who was reacting to a statement by the former President that the APC won the 2015 election using lies and propaganda and challenging the party to a public debate in its achievement in office said “Mr President was very clear that the man left almost an empty treasury, consequent unpinned which we have a huge infrastructure deficit.
The world knows that almost all infrastructure that Jonathan inherited went bad. We are challenging him to show us one project he completed.
Is it the Green Field refineries. He told us on May 13, 2010, that he is going g to build three greenfield refineries at $23 billion. The contract was awarded to the Chinese under Public Private Partnership. One was to be located in Bayelsa, one in Lagos and the other in Kogi state.
“We challenge him to show us the three greenfield refineries or tell us where the money he voted for the project is. I am talking at a time when our Excess Crude Account was in the excess of short $17 billion. The Chinese came back and told him they were going to contribute about 80 percent of the three greenfield refineries. We have not seen any of them.

“If we had seen the three greenfield refineries which he publicly announced, the billions we lost in the importation of refined petroleum products and the gross unemployment engendered by the looting of that fund would have been avoided and that is what we are talking about.
“Before and during his regime, there was money voted for the cleaning of Ogoni environment that was degraded by oil spill. It is The Buhari regime that started that project now. Did Jonathan do anything there, did he complete the East/West road? That is a road that covers the nerve Centre of the Niger Delta where he comes from.
“If there is any project that he promised to implement that he has done, he should tell us. Don’t forget that the average price then was about $100 per barrel. I don’t see how he can be calling for a public debate because I am talking of just one region.
“Even the development he did in the Nigerian Airports, is it commensurate with the amount of money voted or the amount of money borrowed? He said he did this or that. Is it commensurate with the amount of money voted?
“If I am in his shoes, I should retire back to the village or any city of my choice and keep my cool because if he talks of a debate, we will bring out what happened during his time.
“The fact that his wife was coming to claim $15 million saying it was out of her handwork borne out of being the First Lady and a Permanent Secretary in Bayelsa state. Is it that other Nigerians are not working hard to be worth $15 million. So, let us not go into Jonathan ‘s matter.
“We are not talking of Dizeani who was Minister of Petroleum under his government who failed to do anything to develop the Niger Delta, rather resorted to an illegal accumulation of wealth. I have great respect for him as a former President and being gracious enough to accept his defeat. But if he wants to open the vault, then we can go back and open the pandora box for him. So, let us leave it at that.”
APC National Publicity Secretary, Mallam Bolaji Abdullahi could not be reached for the party’s official reaction as at the time of this report, but he was quoted as saying that the former President may have been misquoted.
Bolaji was quoted as saying “I doubt that President Jonathan actually said these words you have reported because he would be exposing himself to reactions that would not be edifying of his status as a statesman by so doing. Secondly, I know the former President to be of even temperament.
“Only a few days ago, I read that he was counselling his party on the choice of Chairman and Publicity Secretary. Statements like these wouldn’t represent an example of the kind of attitude he was canvassing. But if he truly said that I will say with due respect that he may need to commission a more dispassionate study of how and why APC won the 2015 Presidential elections.
“To say that APC won the election simply by deceiving the people would be too simplistic and may even be interpreted as an insult to the millions of Nigerians that voted the APC into power.”
Follow Us on Twitter!