Home » news » TENSION: Obiano Fires Back At Peter Obi For Campaigning Against Him, Reveals Most Shocking Thing People Don’t Know Their Former Governor

TENSION: Obiano Fires Back At Peter Obi For Campaigning Against Him, Reveals Most Shocking Thing People Don’t Know Their Former Governor 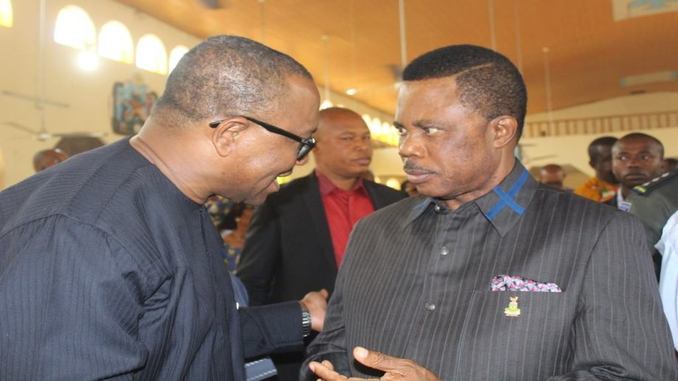 “I told them, I would be the one to lead a campaign against Obiano if he did not perform well in his first term. Today, can anyone show me what the governor has done within his first term? He has nothing to show for it.
I don’t have any issue with Mr. Willie Obiano as a person, but I have issues with Willie Obiano as governor,” Obi said. Obi, however, said although Governor Obiano is still his bosom friend, his poor performance is worrisome.
“Winning a second term is an easy task for any performing governor as all that is needed is to point at his achievements in the first term and now tell the people what he will do in the second term and the people will vote for him if they are satisfied.
“When I was working for my second term, each community I went to, I showed them what I had achieved, and that made it possible for the people to vote for me because they saw what I could do. “We challenge Obiano to show us what he has done in his first term.
Go to all parts of the state where all of you come from, can you mention the things he has done? He has done nothing. That is why I am here to lead the campaign for his removal,” Obi noted.
Obiano said Peter Obi ran away from challenges in Anambra state after his tenure as governor of the state. He also said the era of godfatherism has ended in Anambra state.
Follow Us on Twitter!