Home » news » THE UNTOLD: Why Yoruba Govs Shunned APC Meeting Summoned By Oyegun, How Plot To Endorse Buhari For 2019 Thwarted

THE UNTOLD: Why Yoruba Govs Shunned APC Meeting Summoned By Oyegun, How Plot To Endorse Buhari For 2019 Thwarted 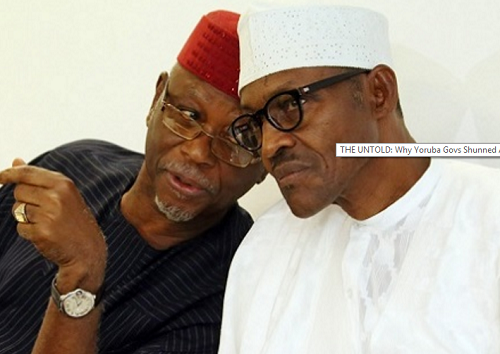 The growing rift among leading figures in the All Progressives Congress has been cited as the reason behind the absence of all governors of the South-West states from the party’s consultative meeting in Abuja.
It was learnt in Abuja on Saturday that the absence of the governors was designed to “send a message” to the party’s administrative leadership.
The consultative meeting, which was held at the party’s National Secretariat, Abuja, on Wednesday, was at the instance of the Chief John Odigie-Oyegun-led National Working Committee.
Apart from the deputy governor of Ondo State, Agboola Ajayi, who represented his governor, Rotimi Akeredolu (SAN), none of the other five South-West governors attended the meeting or sent in representatives.
It was also unclear whether they sent in apologies as is usually the practice.
A top-ranking source within the party’s hierarchy, who spoke on condition of anonymity, said, “It was a message to all who care to understand the way the South-West plays its politics; there are no permanent friends or enemies but permanent interests.
“Did you see the attendance during the South-West zonal meeting? That should tell you something. I can assure you that all those absent from this (Wednesday’s meeting) will be present at the caucus meeting on the 30th (October) and NEC on the 31st if God keeps us alive.”
Although the Bauchi State governor, Abubakar Mohammed, told reporters on Wednesday, that the issue of an automatic ticket for President Muhammadu Buhari did not come up, a party source, who attended the meeting, said there were subtle moves to use the gathering to endorse Buhari for 2019.
However, the idea was said to have been dropped after a governor from the North-West and another from the North-Central drew the attention of those at the meeting to the dangers of doing so “at the moment”.
The source stated, “The governors argued that doing so at this point would not only polarise the party, but also make it vulnerable. They cited an example of the crisis the opposition PDP is grappling with in Anambra State with various factions laying claim (to the governorship ticket) after the imposition of a candidate.
“Another matter, which was discussed, was the unfavourable response of some of our party governors to fulfil their financial obligations to the party.
“Two South-West governors were specifically mentioned. The last time one of them came here was when he needed the party’s support for his candidate, who eventually lost in a bye election. The other one has only been here maybe just once after he won his election and both of them are from the South-West.

“A suggestion that we send a delegation to them to find out what is happening was turned down because some of the governors present said they contacted both of them but they said there was no problem.
“Most active politicians in the South-West don’t want a repeat of what happened to Alhaji Lateef Jakande and Ebenezer Babatope during the (Sani) Abacha days. NADECO asked them to withdraw from the administration; they refused. They are still finding it difficult to find a space within the main stream of Yoruba politics ever since.
The source also revealed that a majority of those at the meeting described the proposed amendment to 88 items in the APC constitution as “too much.”
Most of the governors present noted that it was too early in the day for the party to make such huge amendments to a document that was less than four years old.
A governor from the North-West told the gathering that as a lawyer, it was his opinion that the party was already running behind schedule with respect to its bi-annual national convention. The last one was held in March 2016.
But the National Publicity Secretary of the APC, Mallam Bolaji Abdullahi, explained that the absence of some of the party’s governors from the meeting was “just a coincidence.”
He said, “It was just a coincidence that some of our governors were not at the meeting. To single out those from the South-West would be unfair; the Ondo State deputy governor was here. Before now, Lagos (governor) usually sends his deputy. The governor of Osun and his counterparts from Sokoto and Zamfara states among others usually attend but they could not make it this time. It is not a sign that anything is wrong.”
Governors, who attended Wednesday’s meeting, included the Plateau State governor, Simon Lalong; Kebbi State, Atiku Bagudu; Kaduna State, Nasir el-Rufai; and Imo State, Rochas Okorocha.
Others were Adamawa State governor, Jibrila Bindow; his counterpart in Bauchi State, Abubakar Mohammed, and that of Edo State, Godwin Obaseki.
The Kogi State governor, Yahaya Bello, and his Ondo State counterpart, Rotimi Akeredolu, were represented by their deputies.
While briefing journalists after Wednesday’s meeting, the Bauchi State governor, Abubukar Mohammed, blamed the absence of some of his colleagues on the exigencies of office.
He stated, “There is no communication gap. Two other deputy governors sent words that their flights were cancelled because of weather problem.
“The same thing applied to the governor of Sokoto State, who sent words that his flight was cancelled due to difficulty in weather. So, there is no communication gap whatsoever.
“In the past, the governors have been attending. Governors are very busy people, and it is always very difficult for us to have time to be on the field in addition to running our states.”
Follow Us on Twitter!