Home » news » “We Know You Are Packaging Yourself To Become Vice President In 2019” – IPOB Fires Back At Ohaneze Leader, Nwodo.

“We Know You Are Packaging Yourself To Become Vice President In 2019” – IPOB Fires Back At Ohaneze Leader, Nwodo. 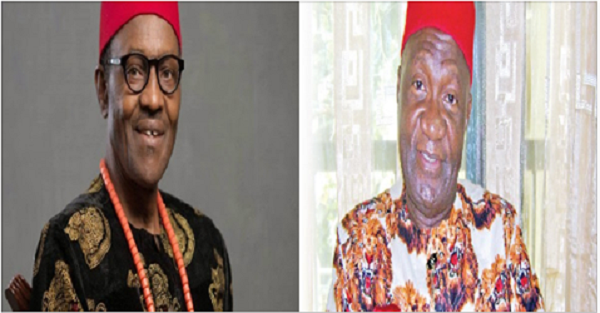 “We begin by reminding Nwodo, that our leader, Mazi Nnamdi Kanu represents the righteous anger of the much abused, much betrayed masses of Eastern region, who have watched helplessly for 47 years as their so called leaders traded away their collective future for peanuts.” The group said Nwodo was angry that they did not support his ambition to be leader of the Igbo people.
It said: “Nwodo is piqued and pissed that we did not allow him to trade with the great IPOB and present himself as the overall leader of Eastern Nigeria, thereby packaging himself as the ultimate VP choice for 2019.

“We have nothing against his secret and hidden political ambitions. We wish him luck. It’s just that Nnamdi Kanu and IPOB will not be available for him to trade off. We will always prefer men like the 87 year old Prof Ben Nwabueze, First Republic Minister Mbazuluike Amechi and the upright Archbishop Anthony Obinna to lead us to any meeting with government.
“When we stopped activities in Biafraland on 30th May this year and the oppressor panicked and responded with a quit notice, the F.G. immediately reached out to all the zones, Nwodo moved his train to Abuja and met with the Acting President, Osinbajo and announced that check points and appointments into Buhari’s government were our only grouse with Nigeria. This is a blatant lie because our leader agreed with Nwodo that Nigeria must show commitment towards addressing our key demand which is referendum.”
The group also alleged that Nwodo was unhappy that he was not allowed to attend the meeting Kanu had with Igbo leaders.
It also said that when vice president Yemi Osinbajo called for a meeting with Igbo leaders, Nwodo attended without asking for their opinion or their grouse with the country.
Meanwhile, the Ohanaeze Ndigbo revealed why it supported the ban of IPOB by governors from the southeast region.
The group said the southeast governors did well for the people in the region and Nigeria as a whole by saving millions of lives and dousing tension in the region. Speaking in Umuahia, the national president of Ohanaeze Ndigbo, John Nwodo said the region was saved from a major blood bath.
Follow Us on Twitter!